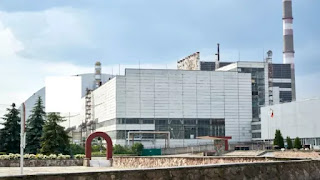 material from a radiation monitoring laboratory near the defunct nuclear power plant. There seems to be a low risk that this material would be used in so-called dirty bombs, an expert told Live Science.

The looters took pieces of radioactive waste, which could theoretically be used to create a dirty bomb, a device that combines radioactive material with a conventional explosive, Anatolii Nosovskyi, director of the Institute for Safety Problems of Nuclear Power Plants (ISPNPP) in Kyiv, told Science. They also swiped radioactive isotopes — radioactive chemical elements with different numbers of neutrons in their nuclei — that are usually used to calibrate instruments in the monitoring lab, Nosovskyi said.

On March 25, Science reported that the radioactive material had been stolen. New Scientist later confirmed these reports with an ISPNPP scientist, who spoke with reporters on the condition of anonymity. The source said that the earlier Science report was "accurate based on the information available."

The stolen material can't be used to make nuclear weapons, as it doesn't contain any plutonium or uranium, Bruno Merk, a research chair in computational modeling for nuclear engineering at the University of Liverpool, told New Scientist.

"There are so many radioactive sources around the world. If someone wants to get their hands on this there's an easier way," Merk said. "These radioactive sources you can steal in every hospital. It would always have been possible for someone to sneak in and steal something. I don't see that the risk is any higher than before the Russians invaded."

Although its not useful for making nuclear weaopns, some of the stolen material could be of very limited use in the construction of a dirty bombs, Merk told New Scientist.

"Calibration sources" — meaning the isotopes — "typically have very small quantities of radioactive materials," Edwin Lyman, a physicist and the Director of Nuclear Power Safety with the Union of Concerned Scientists, told Live Science in an email.

If the stolen waste materials were highly radioactive, they would need to be stored and transported in heavy shielding, to protect the handlers from radiation injury. Because of this, "I suspect the stolen samples are also small quantities," he said.

"I'm skeptical that there would be any strategic purpose for Russia to use these materials in a dirty bomb," Lyman told Live Science. Such a bomb could spew radioactive material over a localized area, but it would be unlikely to cause many immediate severe health effects. That said, the extent and severity of the potential damage would depend on the size and other characteristics of the materials in question, he noted.

In general, dirty bombs, also known as "radiological dispersal devices" (RDDs), do not release enough radiation to kill people or cause severe illness, according to the U.S. Nuclear Regulatory Commission. Those closest to the bomb when its detonated would be the most likely to be injured by the explosion itself, while the resulting radiation could be dispersed within a few blocks or miles from explosion site.

"As radioactive material spreads, it becomes less concentrated and less harmful," the Commission notes. "Immediate health effects from exposure to the low radiation levels expected from an RDD would likely be minimal."

"It's unlikely that such a bomb could cause death, destruction and terror anywhere near the scale of Russia's bombardment of civilian areas with conventional weapons," Lyman said. "Although the presence of radioactive contamination could add another element of fear to an already frightful situation."