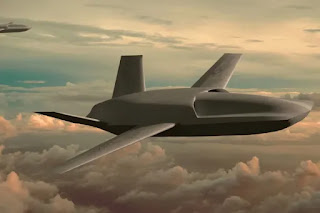 Artist's concept of the Gambit combat drone
General Atomics
General Atomics Aeronautical Systems, Inc. (GA-ASI) has unveiled its latest jet-powered robotic drone, the Gambit, which is designed to use artificial intelligence and autonomous systems to fly alongside human-piloted aircraft and achieve air dominance.
General Atomics is known mainly for its drones like the SkyGuardian or the Mojave – robotic aircraft with very long endurance that can loiter over an area for extended periods for either reconnaissance or while awaiting the signal to take out a ground target with missiles like the Hellfire.

Now, the company has joined competitors like Boeing and Kratos to produce a full-on combat drone with the lines and performance of a fighter jet. According to GA-ASI President David R. Alexander, Gambit is an Autonomous Collaborative Platform (ACP), a flying team-mate that will work with piloted aircraft, penetrating into combat zones to detect, identify, and target adversaries at range and scale before they can become a threat to its human partner. In this way, fewer lives are put at risk and more time is gained for critical decision-making.

“Now we’re once again pushing the boundaries of what’s possible with unmanned aircraft, software, mission systems integration and more," said Alexander. "Gambit will usher in a new era, where UAS work collaboratively with manned aircraft to detect, identify and target adversaries at range and scale across the battlespace.”

Because Gambit uses AI and can perform a number of tasks autonomously input from an operator, it will be able to take the initiative and carry out tasks on its own, not only for combat, but also for intelligence, surveillance, and reconnaissance, while distributing the collected information to all relevant units. The Gambit was designed using digital engineering, which will help keep costs down and minimize the time from drawing board to delivery.

"We’re designing systems to meet future requirements, to include working collaboratively and autonomously," said Alexander. "Gambit is part of a broader Family of Systems strategy that began with Predator and Reaper, and continues in support of USAF’s future force design concepts."