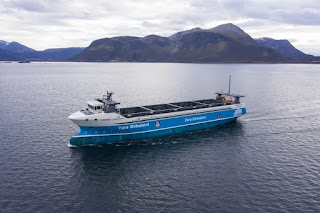 A future-focused ship designed as the world's first all-electric, autonomous cargo vessel has debuted in Norway, where it is intended to replace 40,000 diesel-powered truck journeys every year. The Yara Birkeland made a short, crewed trip to the capital of Oslo as part of its unveiling, with work to now begin on certifying it as an autonomous container vessel ahead of commencing commercial operations.

As a joint venture between chemical production firm Yara and maritime technology company Kongsberg, the Yara Birkeland was announced back in 2017 as the world's first all-electric and autonomous container ship. The plan is to use the ship to ferry chemicals and fertilizer from Yara's production plant in Prosgrunn to nearby towns, making significant reductions in NOx and CO2 emissions by negating the need for diesel-powered truck transport.

The 80-meter-long (262-ft) vessel is powered by a 6.8-mWh battery pack and can carry up to 3,200 tons at a maximum speed of 15 knots (28 km/h, 17 mph). Alongside production of the ship itself, Yara is tapping into its own stocks of ammonia used in its fertilizer production to develop a zero-carbon fuel source for eventual use aboard the Yara Birkeland. There is considerable and growing interest in ammonia as an alternative to diesel for long-haul shipping, though there are many kinks to iron out in terms of its production and how it can best be used.

“Renewable energy was our starting point in 1905, now, ammonia can bring us back to our roots," says Magnus Krogh Ankarstrand, CEO of Yara Clean Ammonia, as the initiative is called. "Our large shipping network and existing infrastructure means that ammonia has the potential to become the leading fuel for long-distance shipping globally,”

The Yara Birkeland's maiden voyage saw it travel from the town of Horten to Oslo, around 70 km (43 miles) away on November 18. The visit to the capital was arranged for partners on the project to experience the ship up close, and for government officials including Prime Minister Jonas Gahr Støre to receive a tour from Yara CEO Svein Tore Holsether.

“We are proud to be able to showcase the world's first fully electric and self-propelled container ship," says Svein Tore Holsether, CEO of Yara. "It will cut 1,000 tonnes of CO2 and replace 40,000 trips by diesel-powered trucks a year."

With its first voyage behind it, the Yara Birkeland will commence commercial operations in 2022, while a two-year testing period will take place alongside designed to certify it as an autonomous vehicle. Technology company Kongsberg will be responsible for integrating the sensors and other systems for autonomous navigation, with the pathway to full autonomy to also include a phase of remote operation.

“We have been looking forward to this day for a long time. Yara Birkeland will transport mineral fertilizer between Porsgrunn and Brevik and will contribute to significant emission cuts during transport," says Holsether. "This is an excellent example of green transition in practice, and we hope this ship will be the start of a new type of emission-free container ships. There are a lot of places in the world with congested roads that will benefit from a high-tech solution like this."

You can see snippets from the Yara Birkeland's maiden voyage in the video below.