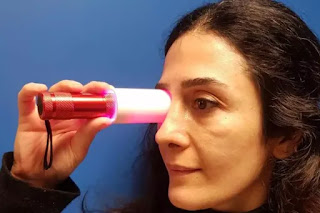 Dr Pardis Kaynezhad (UCL Institute of Ophthalmology) holds a deep red light over her eye, which helps stimulate the mitochondria in her retinal cells
UCL
As we age, our eyesight naturally declines but a new study has found exposing our retinas to short bursts of deep red light can help deteriorating vision. The research shows just three minutes of exposure to 670-nanometer (long wavelength) deep red light in the morning can improve color contrast vision by nearly 20 percent.
Last year a team of researchers from University College London reported that briefly exposing the eye to a deep red 670-nanometer beam of light on a daily basis for just two weeks improved vision in elderly subjects. This new study, published in the journal Scientific Reports, further investigated the phenomenon, looking at the effect of a single three-minute red light exposure.

Inside all our cells are energy factories known as mitochondria., and these tiny factories produce a molecule called adenosine triphosphate (ATP), the gas that fuels our cells.

As we age, our mitochondrial functions gradually decline. Less ATP is produced, leading to decreased cellular functions. Our retinas age incredibly rapidly and some estimates indicate ATP production by photoreceptor cells in the eye can drop up to 70 percent over a human lifespan.

Twenty subjects were recruited and exposed to three minutes of 670-nm deep red light between 8 am and 9 am, and vision was measured using a "Chroma Test" designed to assess color contrast.

On average, the researchers detected a 17 percent improvement in "Chroma Test" scores several hours after the red light exposure. In older subjects the improvement was greater than 20 percent and the benefit was found to last at least one week.

Interestingly, the researchers conducted the same experiment with a smaller cohort several months later but delivered the exposure in the early afternoon. No improvement at all was detected, suggesting circadian cycles play a significant role in the mitochondrial response to deep red light.

“Using a simple LED device once a week, recharges the energy system that has declined in the retina cells, rather like re-charging a battery,” notes Jeffrey. “And morning exposure is absolutely key to achieving improvements in declining vision: as we have previously seen in flies, mitochondria have shifting work patterns and do not respond in the same way to light in the afternoon – this study confirms this.”

The researchers are cautious to point out that a huge variability in vision improvement was seen between individuals in the study. It is suggested there are unknown variables that could be influencing the success of this therapy so further work with larger cohorts will be needed to better tease out who this treatment will work best for and how to optimally deliver the light exposure.

Nevertheless, Jeffrey is optimistic that once the therapy is refined it could become a cheap and easy way to improve vision in the elderly. The technology is safe and the intervention is easy, making this a promising way to push back on age-related vision decline.

“Given its simplicity, I am confident an easy-to-use device can be made available at an affordable cost to the general public,” Jeffrey concludes. “In the near future, a once a week three-minute exposure to deep red light could be done while making a coffee, or on the commute listening to a podcast, and such a simple addition could transform eye care and vision around the world.”

The new study was published in the journal Scientific Reports.