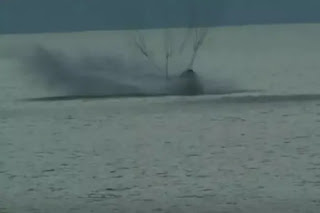 Inspiration4 splashing down
SpaceX
Inspiration4, the first all-private crewed mission into space, has returned to Earth. The Crew Dragon capsule chartered by billionaire Jared Isaacman from SpaceX splashed down today in the Atlantic Ocean off the coast of Florida at 7:07 pm EDT after three days in orbit.
Today's splashdown marks the end of the historic mission that was the first time a privately owned and operated spacecraft on a private charter flew into space with a crew that did not involve any government astronauts. Inside the reusable Resilience capsule were Mission Commander Jared Isaacman, Medical Officer Hayley Arceneaux, Mission Specialist Chris Sembroski, and Mission Pilot Dr. Sian Proctor, a geoscientist.
During the three-day mission that began on September 15, 2021 when it launched atop a SpaceX Falcon 9 rocket from Launch Complex 39A at NASA’s Kennedy Space Center in Florida, the spacecraft reached an altitude of of 575 km (357 miles), making it the highest-flying crewed mission since the STS-61 Space Shuttle flight in 1993 to service the Hubble Space Telescope.

Inside Resiliance prior to reentry
SpaceX
While in space, the crew made live webcasts to audiences back on Earth and when they weren't conducting research on human health, they enjoyed views of the Earth from a multi-layer glass cupola that replaced the docking mechanism in the nose of the capsule. However, the main purpose of the mission was to help raise US$200 million for the St. Jude Children's Research Hospital in Memphis, Tennessee.

Though it was billed as the first space mission with an "all-civilian" crew, that honor goes to the one-person Vostok 6 in 1963 when, though it was a government spacecraft, Valentina Tereshkova became not only the first woman in space, but also the first astronaut who did not hold a military rank.

However, Arceneaux set a new record as the youngest American in orbit and Inspiration4 marked the first time, along with the International Space Station and China's Tiangong mission, that 14 people were in orbit at the same time.

The video below is the live feed of the splashdown.