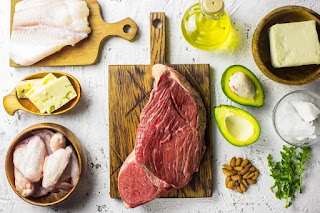 A new research review published in the journal Frontiers in Nutrition

argues popular low-carbohydrate ketogenic diets are unhealthy for most people. The review rekindles a long-standing debate over the dangers of high-fat/low-carb dietary strategies.
Ketogenic diets can take a number of different forms. The general idea is to induce a metabolic state called ketosis by strictly eating foods high in fat but low in carbohydrates and sugars. This forces the body to turn to burning stored fats for energy instead of carbohydrates, leading to swift reductions in body weight.

Originally developed a century ago as a treatment for pediatric epilepsy, the dieting strategy has become popular in recent years. And that’s because it does rapidly reduce body weight while allowing the dieter to eat an often meat-heavy diet.

But the long-term health effects of ketogenic dieting are controversial. Many nutritionists argue ketogenic diets are fundamentally unhealthy and Lee Crosby, lead author of this newly published review, goes so far as calling the typical keto diet “a disease-promoting disaster.”

The review article finds ketogenic diets particularly unsafe for pregnant women and people suffering from kidney disease. It also indicates the long-term health effects of the diet are unclear, with many ketogenic foods linked with heart disease and cancer.

"In addition to the significant risks to kidney disease patients and pregnant women, keto diets are risky for others, too, as these diets can increase LDL cholesterol levels and may increase overall chronic disease risk," adds Crosby. "While keto can reduce body weight short term, this approach is not more effective than other weight-loss diets."

The article concedes ketogenic diets are effective in reducing seizure frequency and suggests use in patients with drug-resistant epilepsy is well-supported. But in almost all other cases the “risks of [ketogenic] diets outweigh the benefits.”

The new review article is peer-reviewed, and published in a respected journal, but it is worth noting it’s not without a conflict of interest. The study was funded by a non-profit called the Physicians Committee for Responsible Medicine, an organization that promotes plant-based diets and advocates alternatives to animal testing in science.

Despite this, the long-term health effects of ketogenic dieting are still profoundly unclear. A small body of research, primarily using mice, has indicated high-fat/low-carb diets may be beneficial to both healthspan and lifespan.

However, a Yale University study published last year found the benefits of ketogenic diets may be short-lived. Using animal models the research found the metabolic benefits of a keto diet disappeared in mice when the eating strategy was maintained for many months. These findings somewhat gel with a 2019 review on intermittent fasting finding periodic switching between different metabolic states may be most beneficial to humans.

So, the jury is certainly still out on the long-term health implications of eating a ketogenic diet, but one thing we do clearly know for sure is that a balanced diet nutrient-rich in fruits, vegetables and grains is good for one’s health.

The new study was published in the journal Frontiers in Nutrition.