What is the Delta variant and how is it altering the course of the pandemic? 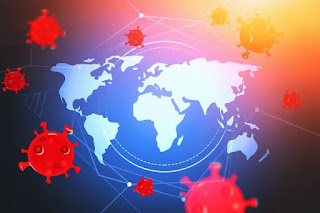 are due to the Delta variant. In the US the Centers for Disease Control and Prevention warn the variant will likely become predominant in the coming months. What is the Delta variant, why is it posing such a problem, and will our vaccines still provide protection against it?

The Delta variant was first recorded in India in December 2020. It is one of three lineages of the B.1.617 variant and by June 2021 had been detected in around 80 countries.

While it is still unclear exactly how the Delta variant is more infectious than prior iterations of the virus, epidemiological studies in the UK are seeing it dramatically outperform the previously dominant Alpha variant (also known as the UK variant). Rochelle Walensky, director of the CDC, expects the Delta variant to overtake the Alpha variant in the US over the next few months.

"There is in vitro evidence suggestive of increased replication in biological systems that model human airway," states a recent report from Public Health England. "It is highly likely that Delta is significantly more transmissible than Alpha."

“Early evidence from England and Scotland suggests there may be an increased risk of hospitalization compared to contemporaneous Alpha cases,” reports Public Health England. “A large number of cases are still within the follow up period. In some areas, hospital admissions show early signs of increasing, but the national trend is not clear.”

The current UK surge is coming mostly from infections in young and unvaccinated people. Most recent cases are aged under 40, an age group already less likely to suffer from severe COVID-19. This makes it challenging to ascertain whether the Delta variant is more deadly than prior variants, however, Steven Riley from Imperial College London warns the increased case load will inevitably lead to more infections in older vulnerable groups.

“Even though we are seeing the highest infection prevalence in younger people who are less susceptible to COVID-19, if this growth continues it will drive up infections in older, more vulnerable people, as the vaccines are not 100 percent effective and not everyone has been fully vaccinated,” says Riley. “This would lead to more hospitalizations and deaths, and risks straining the NHS, which is why it’s vital that people take up their vaccine offer and continue to stick to the rules.”

Early epidemiological studies are finding our current COVID-19 vaccines are still effective against the Delta variant. Perhaps most importantly, however, it seems completing a full two-dose course of vaccination is vital to gain effective protection against this new variant.

A Public Health England study found the Pfizer vaccine is 96 percent effective against hospitalization from the Delta variant and a study out of Scotland found the Pfizer vaccine was 79 percent effective at preventing Delta variant infection. This is a slight reduction in vaccine effectiveness compared to prior SARS-CoV-2 strains, but Anthony Fauci says the good news is vaccines still, “work really quite well” against this variant.

“Importantly, the protection against severe disease resulting in hospitalization and death is over 90 percent, 93, 94 percent,” says Fauci. “So if you are vaccinated, you're going to be protected, which is another very good reason to encourage people strongly to get vaccinated, because if you are not vaccinated, you are at risk of getting infected with the virus that now spreads more rapidly and gives more serious disease.”

Are the symptoms different?

Previously, symptoms such as cough or loss of smell were incredibly prominent signs of COVID-19, but the Delta variant is presenting more often with symptoms such as headache and runny nose. Spector notes these “cold-like” symptoms may result in younger people not realizing they have COVID-19 since people are generally tuned to expect other symptoms.

“COVID is acting differently now. It’s more like a bad cold in this younger population,” explains Spector. “This means that people might think they have just got some sort of seasonal cold, they still go out to parties and they might spread it around to six other people.”

“It completely changes the game”

It may be too early to understand what impact the Delta variant will ultimately have on hospitalizations and deaths, but researchers are noting this strain could change the course of the entire pandemic. Tony Blakely, an epidemiologist from Melbourne University, points out the recent rise in UK COVID-19 cases suggests a high proportion of the population needs to be fully vaccinated to overcome the Delta variant.

Looking at the UK, for example, currently around 80 percent of the adult UK population has had one vaccine dose, but under 50 percent have completed the two-dose regime. In the US, 45 percent of the total population has been fully vaccinated but rates vary dramatically from state to state. Vermont has strikingly high numbers with 64 percent of the population fully vaccinated, while states such as Alabama, Wyoming and Arkansas all struggle to reach even half of that number. This varying coverage could be a problem if the Delta variant continues to spread across the country.

“It completely changes the game,” says Blakely of the Delta variant. “Vaccination is getting more and more important, not just for protecting people against mortality or severe disease, but to get herd immunity up and to damp down infectious spread.”

Zoe Hyde, an Australian epidemiologist, points to a recent Delta variant outbreak in a school in Israel as an indication the nature of pandemic may be shifting. On twitter she argues more attention to measures preventing airborne transmission and starting the process of vaccinating children will be necessary to stifle the spread of Delta.

“The delta variant has fundamentally changed the nature of the pandemic,” Hyde says.