Ground-breaking night-vision film can be applied to regular glasses 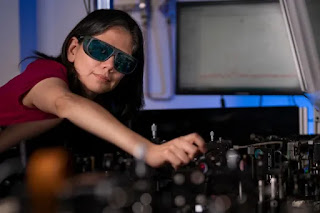 ANU researcher Dr Rocio Camacho Morale has led the development of a groundbreaking night-vision film that could find widespread use
Jamie Kidston/Australian National University
Scientists at the Australian National University (ANU) have developed a new type of night-vision technology that is the first of its kind. Taking the form of an ultra-thin film, it can be applied directly to glasses to act as a filter, needing only a simple laser to convert infrared light into images the wearer can see.
The researchers' groundbreaking film is based on nanocrystal technology that they've been working on for a number of years. These tiny particles are hundreds of times thinner than a human hair, and work by converting incoming photons from infrared light into higher-energy photons on the visible spectrum.
In 2016, the team succeeded in fabricating one of these nanocrystals onto a plane of glass for the first time. This was seen as the first step in developing an array of many tiny photon-converting crystals that together could form a film that changes the way the human eye perceives light. In continuing this work, the scientists have now produced a prototype version of this film they say is lightweight, cheap and easy to mass produce.
"We have made the invisible visible," lead researcher Dr Rocio Camacho Morales said. "Our technology is able to transform infrared light, normally invisible to the human eye, and turn this into images people can clearly see – even at distance. We've made a very thin film, consisting of nanometre-scale crystals, hundreds of times thinner than a human hair, that can be directly applied to glasses and acts as a filter, allowing you to see in the darkness of the night."

Morales tells us the film requires no power source, only a tiny laser like those found in laser pointers, which the nanocrystals combines with the incoming infrared light. In doing so, the film produces "visible images that can be seen in the dark."

Military use seems to be an obvious application for the technology, where it could replace clunky and power-hungry night vision goggles, as well as similar systems used by police or security guards. But because of its compact form, the team imagines it could also be applied to regular spectacles and find everyday uses, making it safer to drive at night or walk home after dark, for example.

"This is the first time anywhere in the world that infrared light has been successfully transformed into visible images in an ultra-thin screen," says study author Professor Dragomir Neshev. "It's a really exciting development and one that we know will change the landscape for night vision forever."

The research was published in the journal Advanced Photonics.