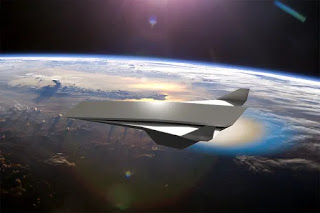 UCF researchers have successfully fired up a new hypersonic detonation engine that harnesses the raw power of a sustained, trapped explosion. The new engine could power aircraft up to 17 times the speed of sound.
Background image credit: NASA. Aircraft and composite image credit: Daniel Rosato, UCF
UCF researchers say they've trapped a sustained explosive detonation, fixed in place, for the first time, channeling its enormous power into thrust in a new oblique wave detonation engine that could propel an aircraft up to 17 times the speed of sound, potentially beating the scramjet as a hypersonic propulsion method.
Deflagration – the high-temperature burning of fuel with oxygen – is a relatively slow, safe and controlled way to release chemical energy and turn it into motion, that's why this nice, peaceful form of combustion underpins so much of our transport technology. But if you want to release the maximum possible energy from a unit of fuel, you get far better bang for your buck from ... well, a bang.

Detonation is fast, chaotic and frequently destructive. It doesn't necessarily require oxygen, just a single explosive material and some kind of energetic poke big enough to break the chemical bonds holding an already-unstable molecule together. It creates exothermic shockwaves that accelerate outwards at supersonic speeds,

People have been trying to harness the raw power of detonation – the most powerful form of combustion – for more than 60 years, but putting a bridle on a bomb has proven extremely difficult. Pulse detonation engines create a series of repeated explosions in a manner similar to a pulse jet, and these have already been tested in aircraft – notably in the Scaled Composites Long-EZ "Borealis" project built by the US Air Force Research Laboratory and Innovative Scientific Solutions Incorporated back in 2008.

Now, another team from UCF, including some of the same researchers that built the rotating detonation engine last year, says it's managed a world-first demonstration of an elusive third type of detonation engine that could out-punch them all, theoretically opening up a pathway to aircraft flying at speeds up to 13,000 mph (21,000 km/h), or 17 times the speed of sound.

The UCF team claims it has successfully stabilized a detonation wave under hypersonic flow conditions, keeping it in place rather than having it move upstream (where it could cause the fuel source to explode) or downstream (where it would lose its explosive advantage and fizzle out into a deflagration).

To do so, the team built an experimental prototype that it called the High-Enthalpy Hypersonic Reacting Facility – or HyperReact, for short. Less than a meter (3.3 ft) long, the HyperReact can loosely be described as a hollow tube, divided into three sections, each with a precisely shaped interior.

The first section is a 350-mm (13.8-in) mixing chamber – a square-section channel with 45-mm (1.8-in) sides. Here, a pre-burner ignites a jet of hydrogen fuel, pre-mixed with air. Four more air channels around the pre-burner jet accelerate the flow to the appropriate speeds.

The second section is a converging-diverging (CD) nozzle, with an axisymmetric square cross-section all the way down. The main fuel injector adds 99.99 percent ultra-high-purity hydrogen fuel to the hot, fast, high-pressure air coming down the tube just before it enters the CD nozzle, which rapidly tapers down to a 9-mm-high (0.35-in) throat before diverging back out to a 45-mm square again. This shape is designed to accelerate the mix up to Mach 5.0 before heading into the final "test section," where the detonation takes place.

The test section takes in that hypersonic air/fuel mix and runs it up a ramp with a 30-degree angle on the bottom side of the square tube. Tuning the flow speed and air/fuel mix, the team was able to find parameters that manipulated the pressure wave interactions in the chamber to produce the unthinkable: a stable, continuous explosion that stayed almost still, fluctuating slightly in a cyclical pattern, over the front lip of the ramp.

Compared to conditions measured with the main fuel injector turned off, peak pressure was 2.7 times higher behind the ramp, and the nozzle exit pressure was 10.5 times higher. The flow velocity was calculated at 99.7 percent of the theoretical detonation wave speed for a freely propagating, normal explosion in the given mixture.

“This is the first time a detonation has been shown to be stabilized experimentally,” says Kareem Ahmed, an associate professor in UCF’s Department of Mechanical and Aerospace Engineering, and one of the authors on the new research paper. “We are finally able to hold the detonation in space in oblique detonation form. It’s almost like freezing an intense explosion in physical space.”

Where a detonation typically lasts only a matter of micro- or milliseconds, the UCF team managed to sustain this one experimentally until the fuel was turned off after around three seconds. That's long enough to prove the device works, Ahmed told LiveScience, and if the team kept the fuel flowing any longer it would've destroyed the quartz windows on the sides of the test section, which were there to allow optical imaging of the tests. Replacing the test section with something entirely metal-sided would allow the detonation to be sustained much longer.

According to Ahmed, the prototype design is reasonably close to what a full-scale production OWDE would look like. The challenge now will be learning how to dynamically alter the fuel mix, flow speed and ramp angle to keep a detonation stable, reliable and controllable over a wide range of operating conditions and control inputs.

The OWDE has been spoken of theoretically for some time, as a potentially superior form of hypersonic propulsion to the scramjet. Scramjets tend to lose efficiency as airspeed rises, potentially topping out around Mach 14. The experimental results released by UCF point toward a "Sodramjet" (standing oblique detonation ramjet) aircraft capable of flying between Mach 6 and Mach 17.

What does it all mean? Well, hypersonic air travel at speeds up to Mach 17 won't just open the door to potential sub-30 minute flights between New York and Los Angeles. It'll also enable spaceplanes to efficiently fly themselves right up into orbit without strapping themselves to rocket boosters. And there could of course be some significant implications for national security and the global nuclear balance of power.

As our own David Szondy pointed out in this terrific hypersonic flight explainer from 2017, there's not a radar or missile defense system in the world that could cope with a hypersonic missile at this point. What's more, you wouldn't even need a warhead on it to cause levels of devastation rivaling that of a nuclear bomb. "All that speed and all that inertia turns any research platform, recon unit, or passenger aircraft into a potential kinetic weapon," writes Szondy. "They don't need high explosives to destroy a target. All they have to do is hit it. In other words, any hypersonic vehicle is an intrinsic weapon given the proper modifications."

Indeed, the research was funded not only by the National Science Foundation and the NASA Florida Space Grant Consortium, but by the Air Force Office of Scientific Research. So these bottled explosion engines are clearly a matter of military interest.

The paper is open-access at PNAS.