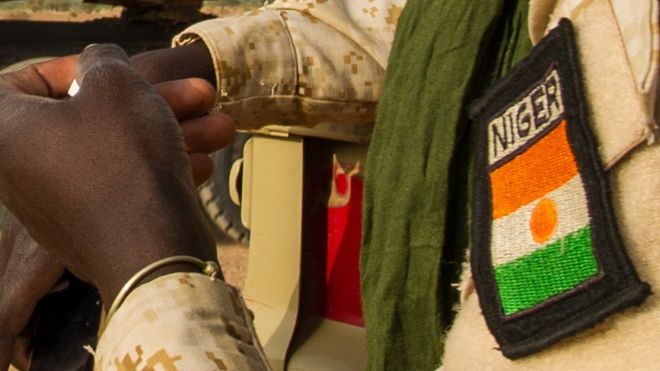 At least 25 soldiers have been killed
in a suspected jihadist attack on a military camp along the western border with Mali, Niger's army says.

More than 60 militants were also killed when the army - supported by partners - responded with air power, it says.
Last month, 71 soldiers were killed in an ambush claimed by an affiliate of the Islamic State group in the region.
Along with its neighbours, Niger has been hit by an upsurge of violence by Islamist militants in West Africa.
The Thursday attack in Chinagodrar base, about 209 km (130 miles) north of the capital Niamey, comes just days before France, which has thousands of troops in the region, hosts West African leaders to assess military operations in the Sahel region.
Niger is a member of the French-backed G5 Sahel group, a taskforce created by the region's leaders in 2014 which aims to fight the militants; it also includes Burkina Faso, Mali, Mauritania and Chad.
But despite its creation and the presence of 4,500 French soldiers and more than 14,000 UN peacekeepers, the jihadist groups have stepped up their attacks.
Groups allied to both the Islamic State group and al-Qaeda are active in Niger.
The December attack in In Ates, not far from the border with Mali, was said to be the deadliest attack against Niger's army since an Islamist insurgency began five years ago.
In October 2017, four US soldiers and five Nigerien soldiers were killed in a jihadist ambush in Tongo Tongo, a village near the Mali frontier, not far from In Ates.