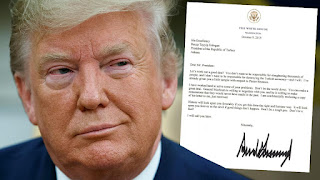 A letter written by US President Donald Trump to Reception Erdogan has been leaked.

“I have worked hard to solve some of your problems. Don’t let the world down. You can make a great deal.

“History will look upon you favourably if you get this done the right and humane way. It will look upon you forever as the devil if good things don’t happen. Don’t be a tough guy. Don’t be a fool!”
“I will call you later”, added Trump. Recall that Trump pulled US forces from northern Syria in the heat of the escalation between Turkey and the Kurdish forces.
﻿
Posted by Tony Ogunlowo at Saturday, October 19, 2019