A family set a world record after growing a massive avocado that was so big it made enough guacamole to feed 20 people. The Pokini family from Hawaii are now in the Guinness Book of World Records after they grew the 5.6-pound avocado, which has officially been recognized as the world’s heaviest. A 5.5-pound avocado grown by Felicidad Pasalo in Hilo, Hawaii, in January 2018 was the previous world record holder. Juliane Pokini said her family got the seed from her brother-in-law, who took it from his parent’s avocado tree in Kailua, Oahu, CNN reported. She sad that it took approximately 10 months, from flowering to harvest, for the fruit to reach its enormous size – which is nearly 15 times larger than the average six ounce avocado. 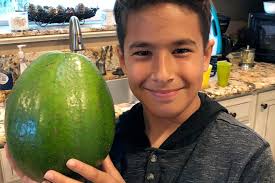 Juliane said: ‘While it was still in the pot it was pulled out twice by our son, we didn’t think it would survive but it did. When we planted it in the ground, we never did anything to it except for some trimming every now and then.’  She added that it took a lot of patience to grow the avocado, as well as apply for the record, which took three months before Guinness accepted the application.
After their application was accepted, the Pokinis had had to send in evidence that they beat the record. ‘For us it was having experts and witnesses available at the time of weighing the avocado along with a certified scale. We also had to have everyone fill out a witness statement along with videotaping,’ Juliane said, adding that they then had to wait another three months before finally earning the coveted title. ‘This avo was about the size of my 12-year-old son’s head,’ she said. The Pokinis ultimately used their prized fruit to make guacamole. They said they are going to continue trying to grow more massive avocados in the future.