SAS out to 'kill or capture' British ISIS fighters.

SAS soldiers are launching 'kill or capture' raids to stop British ISIS jihadis escaping from Syrian jails, it has been reported.

The Special Air Service are monitoring prisons in northern Syria holding ISIS militants.
If a mass prison break is imminent, armed troops in groups of eight using helicopters and vehicles will be deployed, The Daily Star reported.
The strategy comes after a 'huge number' of highly dangerous British ISIS fighters could be released in the next few weeks, intelligence chiefs warned the Government.

The crisis at the camp had been heightened after the decision by US President Donald Trump to withdraw American forces leading to fears that conflict involving Turkish, ISIS and the Kurds could destabilise the area.
And spooks fear the ISIS extremists could flee if Kurdish guards abandon their stations in an attack by Turkish armed forces.
'British extremists are banged up in jails in northern Syria', a source said.
'The remnants of the Islamic State army is waiting to escape and either return to the fight or return to their home countries.'
'The British special forces have been placed on standby. 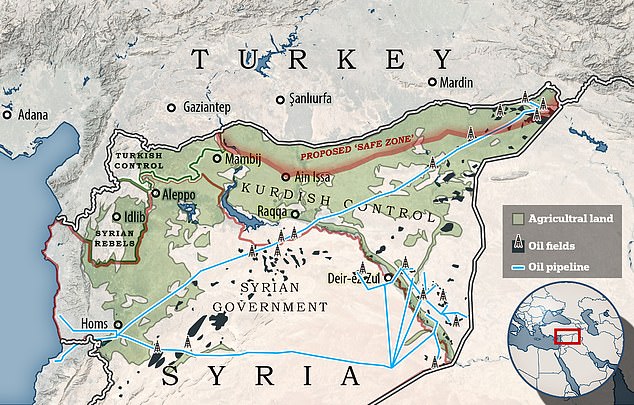 Turkey says it intends to create a 'safe zone' over an area about 30 miles deep and 75 miles wide to push Kurdish militia away from its border and eventually allow the repatriation of up to two million Syrian refugees. The area is rich in fertile lands and encompasses oil fields in the far northeast
The SAS will either try to capture or kill British, European or foreign jihadis who pose a threat.'
The response by the 'Who Dares Wins' force comes after five ISIS terrorists escaped on Friday after Turkish shelling hit a prison holding the militants in northeastern Syria.
A video emerged allegedly showing a number of prisoners escaping the compound, after Turkish mortar fire against Syrian Democratic Forces trying to move the occupants.

It comes as ISIS claimed responsibility for a car bomb attack in Qwamishli that killed three people - although the group has previously claimed responsibility for attacks it has not been involved in.
A prison guard at Navkur, which is located in the town of Qamishli, said before the reported breakout that the facility housed mostly foreign jihadists.
Meanwhile, at the Al-Hawl camp further south, notorious for housing British ISIS bride Shamima Begum, shows ISIS brides allegedly attempting to escape from the camp after starting a riot.

Doctors Without Borders said it was forced to shut down a hospital, which served more than 200,000 people, because of the spreading violence.
Tension is mounting to stop Turkey's offensive towards the Kurds who have accused the US of betraying them by withdrawing troops.
Fighting on the Syrian border town of Ras al-Ain by Turkish forces has caused the pressure to rise.

On Friday 11, Turkish jets and artillery struck around Syria's Ras al Ain. Gunfire could also be heard inside the town, a Reuters journalist in Ceylanpinar said.

A convoy of 20 armoured vehicles of the Turkey-backed Syrian National Army, a rebel militia which Erdogan has allied with in his fight for a 'safe zone,' crossed the border earlier today, some making victory signs and shouting 'Allahu akbar' as they waved Syrian rebel flags on their advance to Ras al Ain.
The Ministry of Defence told MailOnline it does not comment on Special Forces