Elon Musk says prototype Starship will fly in a matter of months . 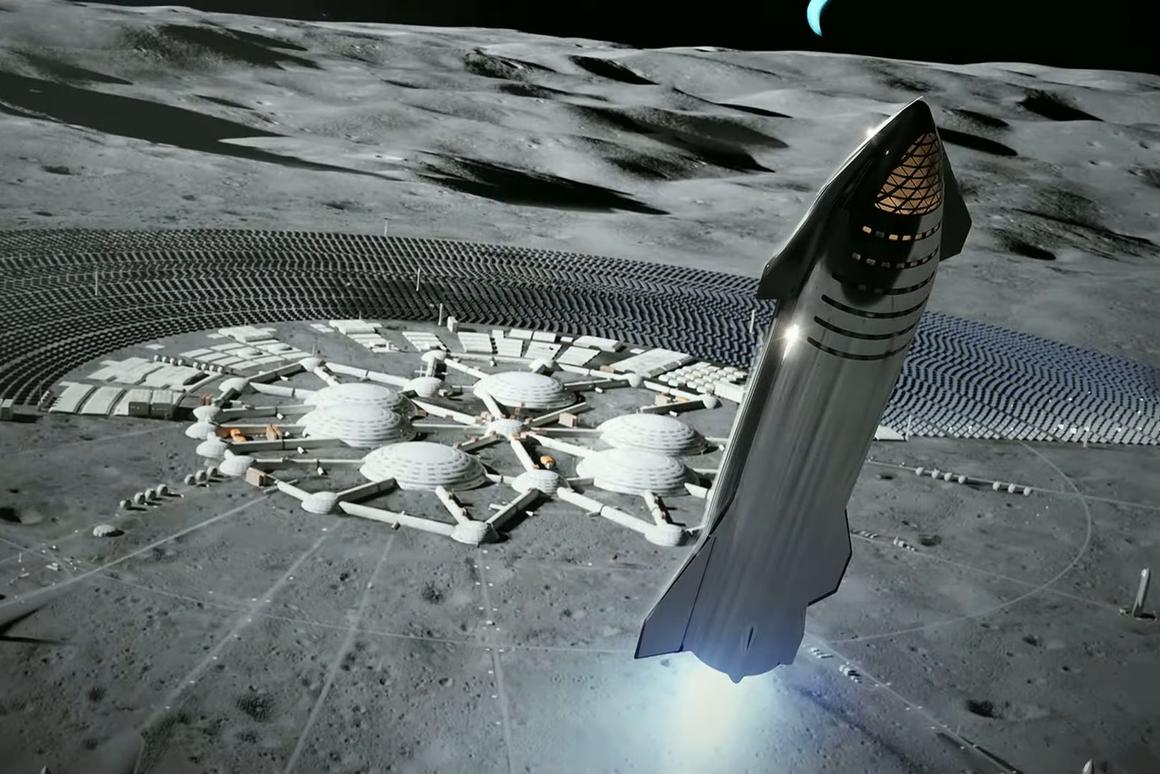 Elon Musk has given an update on SpaceX’s ambitious Starship spacecraft and booster, stating that it could be possible to launch a crewed mission as early as next year. The CEO gave insights into the production timeline and characteristics of the company's ambitious next-generation hardware, with which SpaceX hopes to take astronauts back to the Moon and eventually on to the surface of Mars.
The long-awaited press conference was held in Boca Chica near Brownsville, Texas on September 28 – a day which marked the 11th anniversary of SpaceX’s first successful trip to orbit in 2008, with the fourth launch of its Falcon 1 rocket.
The contents of the SpaceX CEO’s presentations are well-known for being aspirational in nature. However, this time his words were given extra weight by the sci-fi apparition looming behind him – the towering silver profile of the Mk 1 Starship.

During the event, Musk highlighted his vision of a fully operational Starship, which is expected to be a 50 m (164 ft)-long, 6 m (20 ft)-wide bullet-shaped spacecraft capable of carrying a crew of 100 to orbit, and potentially beyond. 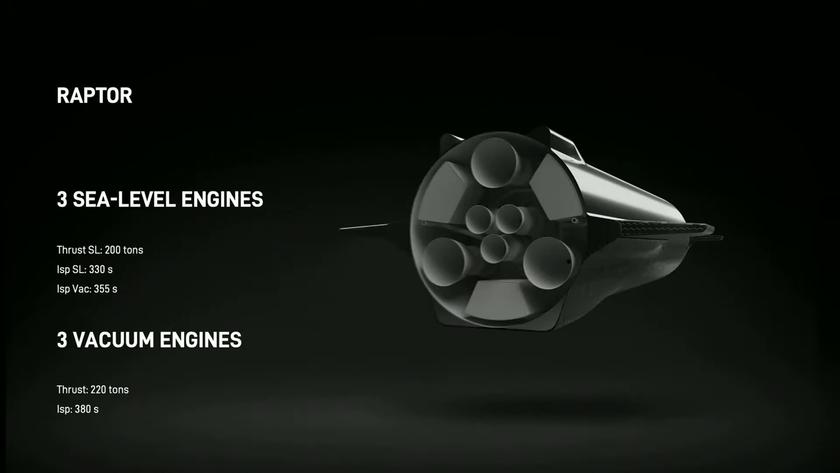 The Mk 1 – which served as Musk's backdrop for the presentation – currently houses three Raptor engines at its base, positioned in a triangle. The completed Starship is also expected to boast three Raptor engines optimized for sea-level operations clustered near the center of the rocket base, but will also have three more Raptors specialized for use in the vacuum of space positioned farther out.
SpaceX projects that a fully-loaded Starship stacked atop its booster could eventually be capable of launching 150 tons of payload into low-Earth orbit for transfer to the Moon or Mars.
Starship – like the Falcon 9 and Falcon Heavy currently in use by SpaceX – is being designed around the ethos of affordability through reusability. This means that the upcoming heavy spacecraft is going to have to make its way safely back to the landing pad once its mission is complete. 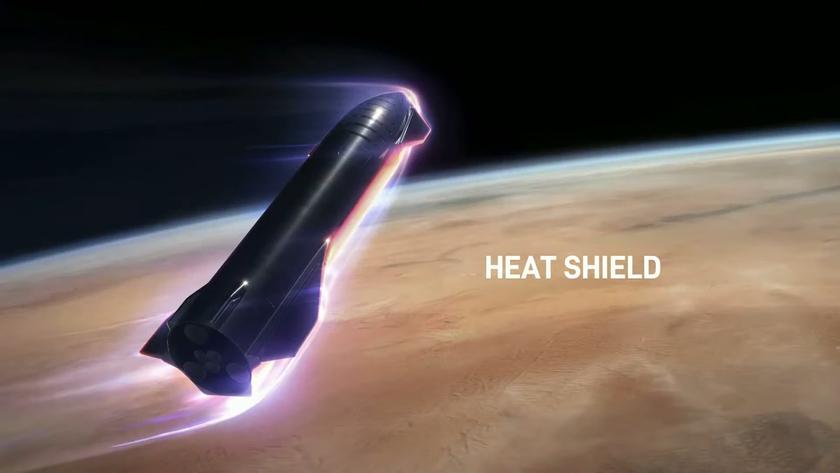 Artist's impression of a Starship spacecraft re entering Earth's atmosphere

﻿
SpaceX is looking at using a different re-entry approach to that used by its current fleet. Instead of re-orientating to enter the atmosphere engine-first, the Starship could plunge into the atmosphere nose-up at a 60-degree tilt. During this phase, the crew inside would be protected from the extreme heat by a layer of tiny hexagonal ceramic tiles that would form a heat shield enveloping the atmosphere-facing side of the spacecraft.
After descending through the upper atmosphere, the Starship would fall through the air while remaining horizontal, using its fins to control its orientation. Upon approaching the surface, the spacecraft would flip into a horizontal position, and make a powered landing using its sea-level-optimized Raptors, much like a Falcon 9.


Elon Musk touched on his love of steel

Before beginning construction of Starship Mk 1, the decision was made to give it an outer shell of stainless steel. During the presentation, Musk made sure that people knew that this design decision had a range of benefits beyond simply giving the prototype a cool sci-fi aesthetic.
“The best design decision on this whole thing is 301 stainless steel, because at cryogenic temperatures 301 stainless actually has about the same effective strength as an advanced composite or aluminum lithium,” explained Musk. “Unlike most steels that get brittle at low temperature, 301 stainless gets much stronger.” Along with being sturdy, the entrepreneur explained that the material was easy to work with, and cost only US$2,500 a ton compared to the $130,000 price tag for the same amount of carbon fiber.
During the presentation Musk also noted that the high melting point of the steel means that less thermal protection may be needed for re-entry.


A shiny booster for a shiny Starship

Details were also given for the 68 m (223 ft)-long booster which, SpaceX hopes, could one day propel Starship into orbit. The massive first stage is designed to take up to 37 Raptor engines, however this number could potentially be scaled back. Seven of these engines will have the capacity to gimbal, or move, granting the booster control over its trajectory. The remaining engines will be fixed.

The first stage will behave much like that of a Falcon 9, but could differ in the way that it re-enters the atmosphere. Musk commented that, if possible, the super-heavy booster would skip the re-entry burn employed by Falcon 9 first stages prior to re-entering the atmosphere. Instead, Starship first stages may rely solely on a landing burn to allow it to gracefully touch down on six landing legs. This would require the first stage to be extremely resilient.

During a Q & A session following the presentation, Musk set out an ambitious timeline for the production and testing of SpaceX’s next generation hardware. The Mk 1 Starship, which stood proudly behind the CEO during the event, is expected to make its maiden flight in the next couple of months. This outing will see the prototype lift off from the launchpad in Boca Chica and soar to a height of 20 km (12.4 miles) above the surface before attempting a powered landing.
The company is also apparently hard at work building more Starship prototypes both at its facility in Texas, and also at the Cape.
“I think we’ll have Mk 2 built within a couple of months, or less, and Mk 3 [in] maybe three months, that type of thing,” commented Musk at the press conference. “Mk 4, four months, maybe five months, and we would seek to go to orbit with probably Mk 4 or Mk 5. This is going to sound totally nuts, but I think we want to try to reach orbit in less than six months.”
Work is not set to begin on the boosters until the first four Starships have been completed. The main constraint regarding production of the first stage is the rate at which Raptor engines can be produced.
“Including development engines from now through orbit we probably need a hundred Raptor engines, and our production rate right now is maybe one every eight to ten days,” said Musk. The company hopes to up the production rate to one raptor engine each day in or by Q1 2020.
Prior to the conference, NASA Administrator Jim Bridenstine tweeted “I am looking forward to the SpaceX announcement tomorrow. In the meantime, Commercial Crew is years behind schedule. NASA expects to see the same level of enthusiasm focused on the investments of the American taxpayer. It’s time to deliver.”

When the stern statement was brought to Elon Musk’s attention, the CEO responded that the vast majority of the company’s resources where dedicated to Dragon, Falcon and Crew Dragon development and operation, with less than 5 percent of the company working on Starship.
In the coming years, Elon Musk envisions that SpaceX’s Boca Chica facility will become more built up, and that the company may add the means to create rocket propellant at the site. The CEO also mentioned that launch and rocket testing operations could be disruptive to the population of the nearby town, and comes with a small amount of danger. The company has therefore made an offer to buy the residents out.

Boca Chica could one day host regular launches. Musk even went so far as to say that there is a 50/50 chance that it will be the site of the first crewed launch, as opposed to lifting off from the Florida Cape. Incredibly, Elon Musk commented that it may be possible to launch a crewed mission as early as next year, depending on whether the company is able to make orbit with a prototype Starship in the next six months.
Once again, Elon Musk’s vision for his company is extremely ambitious. The CEO has stated himself that the timeline he has set out depends on continued exponential development, with each iteration of spacecraft and thruster improving on the last, both in terms of design and production.

Furthermore, many questions remain regarding safety aspects. Granted, at this point the emphasis seems to be on getting the hardware flying, but little has been said regarding life-support systems beyond the fact that they will be regenerative – recycling water, oxygen and other vital resources in much the same way as the International Space Station.
It will also be interesting to see how SpaceX intends to approach its design for a launch abort system (LAS). Traditional abort systems take the form of rocket towers that sit atop a command capsule, and are capable of quickly pulling the crew away from the launch vehicle in the event of a failure either on the pad or during ascent.
This approach doesn’t seem viable given the Starship’s current design, which integrates the crew section with fuel tanks.
Scroll down to watch an animation of Starship launching from Boca Chica, Texas.
Source: SpaceX