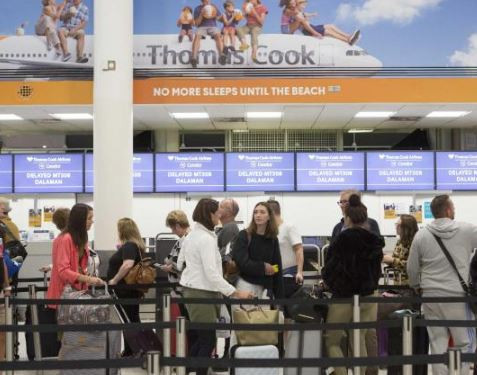 The British travel group on Monday declared bankruptcy after failing to reach a last-ditch rescue deal, triggering the UK's biggest repatriation since World War II to bring back stranded passengers.

The company had been desperately seeking GBP 200 million ($250 million, 227 million euros) from private investors to save it from collapse.

"Despite considerable efforts, those discussions have not resulted in agreement between the company's stakeholders and proposed new money providers," Thomas Cook said in a statement.
"The company's board has therefore concluded that it had no choice but to take steps to enter into compulsory liquidation with immediate effect."
''An application was made to the High Court for a compulsory liquidation of the Company before opening of business today and an order has been granted to appoint the Official Receiver as the liquidator of the Company". it added

Peter Fankhauser, Thomas Cook's chief executive, apologized to customers, employees, suppliers and partners saying; "I would like to apologise to our millions of customers, and thousands of employees, suppliers and partners who have supported us for many years, this marks a deeply sad day for the company which pioneered package holidays and made travel possible for millions of people around the world".

"Fosun is disappointed that Thomas Cook Group has not been able to find a viable solution, We extend our deepest sympathy to all those affected by this outcome, for its financial troubles,'' the company said in a statement.

The UK Civil Aviation Authority also tweeted that all Thomas Cook bookings have been canceled. The move triggers the largest ever peacetime repatriation in the history of the United Kingdom, topping the operation the government carried out after the 2017 collapse of Monarch Airlines.

In a statement, the aviation authority said there are "more than 150,000 Thomas Cook customers abroad, almost twice the number that were repatriated following the failure of Monarch." It said the government has asked it to launch a repatriation program, which would return Thomas Cook customers to the United Kingdom, from September 23 - October 6.
"Due to the unprecedented number of UK customers currently overseas who are affected by the situation, the Civil Aviation Authority has secured a fleet of aircraft from around the world to bring passengers back to the UK with return flights," it said.


The aviation authority launched a website where customers can find details on repatriation flights. "Customers currently overseas should not travel to the airport until their flight back to the UK has been confirmed on the dedicated website," it said.
Depending on where travelers are located, return flights will be either on flights operated by the aviation authority or by existing flights with other airlines, according to Thomas Cook.
For Thomas Cook travelers abroad on holiday packages protected by the Air Travel Organiser's Licence, the aviation authority said it will sort out hotel bills. ATOL is a UK financial protection program that protects most air package holidays sold by UK-based travel businesses.
"While arrangements are being made, please do not make a payment to your hotel unless instructed otherwise by the CAA team," the aviation authority said. "If our guarantee is not accepted by the accommodation provider, we may need to relocate you to another hotel for the duration of your stay."

Thomas Cook customers that only booked hotel stays will not be bailed out by the aviation authority. ATOL protection only applies to hotels when booked as part of an air inclusive holiday package.﻿
Posted by Tony Ogunlowo at Monday, September 23, 2019