The Porsche Taycan Turbo is finally here, and it's an 800-volt electric belter ! 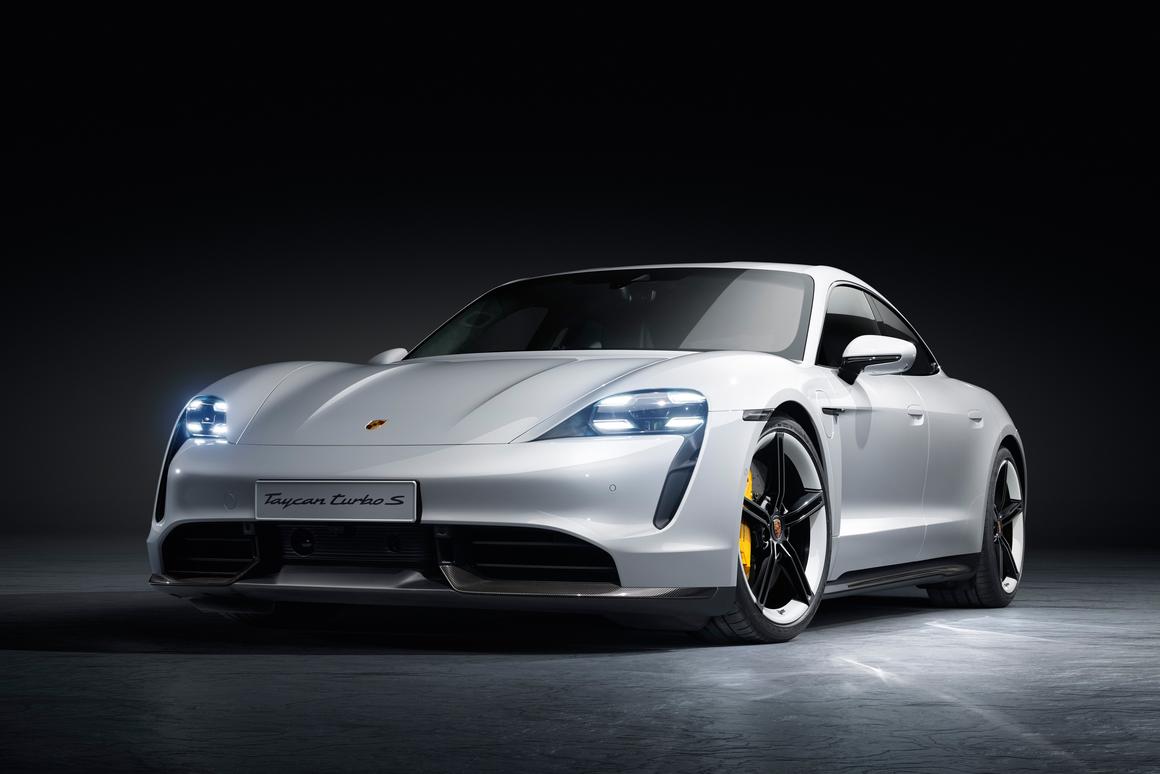 Porsche promised us a four-door electric supercar by the end of the decade back in 2015
, and it has now delivered. With a look strikingly similar to the Mission E concept, albeit with many refinements, the Taycan (pronounced tie-can) was launched overnight in an intercontinental assault, with simultaneous events held at Niagara Falls on the US/Canadian border, a solar farm near Berlin, and a wind farm on Pingtan island near Fuzhou in China.

We already knew it was going to be fast – it set a blistering time around the Nurburgring last month, setting a new record for production electric four-doors. Now we've got all the performance specs, and while the Tesla Model S may tear the Taycan a new one off the line, when it comes to proper, fast performance driving, the new Porsche means business.
There are two models to start with – the Taycan Turbo and Taycan Turbo S, both merrily and confusingly named after a forced induction system they don't have. Porsche has decided that Turbo simply means "fast" in the new electric world, gambling that in 20 years' time everyone will have forgotten the hoops people had to jump through to extract more power out of combustion engines in the first century of the automobile age. "Words have meanings," comes the plaintive cry of the petrolheads and English majors. "Language evolves," grins Porsche, not really caring which side of the fence you land on. The world marches forward, and we feel a little older, and the kids' music seems to be getting worse all the time.
Fear not, there will surely be more Taycans coming, and some of them will probably not be called Turbos. It's become a regular amusement to me, whenever a Porsche story comes up, to go and count how many different models of 911 you can buy. As of today, there are no less than 30 different base model 911s to choose from. The Taycan represents the electric performance future for Porsche, and thus it will begin sprouting convertibles, 2WD entry-level models and all manner of other variants almost immediately.

The interesting bit here, though, is that the Taycans run on an 800-volt system. The Tesla Model S, by comparison, runs at 375 volts. With a higher voltage, you can shift the same amount of energy with lower current. Lower current means less heat to disperse, and smaller, thinner cables.
Porsche's choice to go with an 800-V system makes the Taycans excellent performers in sustained high-load situations. You can drive them very fast all the way around the Nurburgring, and do lots of back-to-back full-throttle acceleration/deceleration cycles before you start running into thermal issues.
You can also charge them at very high rates, meaning that where the infrastructure is available to charge at the Taycan's peak of a whopping 270 kW, you can put 100 km (62 mi) of WLTP range back in the battery in just five minutes, or go from five to 80 percent in a blistering 22.5 minutes.
And because the battery can accept up to 270 kW (362 hp) of charge, you can heave as much power out of regenerative deceleration as some sports cars put into acceleration – stopping harder than most cars can go at full throttle without even touching brake pad to disc. Indeed, Porsche has coated the Taycan's brake discs with an anti-corrosion formula because it frankly expects the friction brakes to get so little use.

There is, of course, a dark side to high-voltage electrical systems: they can zap you to death faster if you manage to make yourself part of the circuit, and where a 110/240-V wall socket shock can be pretty nasty, an 800-V shock for any length of time is proportionally worse if the current's there. The risk of electrocution is probably very low outside of a crash that tears the entire car and the battery pack apart, and lower-voltage, high-current cars have a higher tendency to catch on fire under similar circumstances. So the risk to the occupants of the car won't be much worse.
The takeaway here is, this is one car you shouldn't work on yourself unless you really know what you're doing – and if you see a Taycan (or a Tesla, for that matter) ripped to bits in a high-speed Nurburgring crash, stay clear and let properly trained emergency workers take over.

I'm not gonna lie, I don't find much to get excited about with the Taycan's exterior design. It looks ... fine, and good, in a Porschey, nine-eleveny sort of way, with the requisite coast-to-coast LED brake light that seems to be popping up on just about every quick EV these days.
The signature element on the front is the Taycan's LED headlights, surrounded by four blocky LED driving lamps. They look pretty cool, but then the big ol' brake cooling ducts on the outside edges kind of make the car look like it's crying.

Pair that with the open mouth provided by the carbon front splitters, and you end up with a car that looks a bit terrified and upset about how fast it's going. Or maybe it's just distraught that it's forced to eat the dust of three-year-old Tesla P100Ds at the traffic lights, and the Tesla drivers won't come out into the curvy canyon roads where the Taycan can get its own back.
And it will get its own back on a twisty road, because it's got plenty of Porsche handling in its DNA, including three-chamber air suspension, active damping, dynamic chassis control, electromechanical roll stabilization, and torque vectoring through the AWD system. Everything's managed through a "4D Chassis Control" system that manages and synchronizes all these systems depending on driving modes, road conditions and your behaviour behind the wheel. Porsche knows how to make cornering scalpels, and it's reasonable to expect the Taycan to be an apex predator of the highest order.
It's got a pop-up rear spoiler that angles all the way up to use as a high speed air brake, and a fully enclosed underbody between the splitter and rear diffusers. The hood is low and steep, and the drag coefficient is kept as low as 0.22, helping squeeze range out of the battery at speed. Compact battery and powertrain systems give you plenty of room for luggage: a combined 447 liters between the front and trunk.

The interior will best be remembered for its swooping, sculptural instrument cluster and wealth of screens extending across the dash and down the center console. "Hey Porsche" voice control is a priority, and will possibly teach you how to pronounce the brand name once and for all. Tactile physical buttons are few, predominantly on the steering wheel. This thing is a rolling iPad, with an anachronistic analog clock poking up in the middle.
Well, I think it's a clock, I'm not sure what it is, it only seems to have one hand, but that rotates 0 through 60, and it doesn't seem to be matched to the time, which is presented in old-school LCD digital figures in the middle. I sure do hope it does something useful, because it looks silly and takes pride of place on the dash. Maybe it's the "turbo" boost gauge? I kid, I kid

Interior trim is available in full leather, sustainable leather (probably not super sustainable for the cows involved), and no leather, which is probably what you'll want if you're buying this supercar status symbol under the pretense of being an eco-warrior.
Prices for the Taycan Turbo start from US$150,900, and the Taycan Turbo S starts from $185,000, with an extra premium applied to folks who are first in line when it launches. Yowch.