New species of electric eel is the most shocking animal . 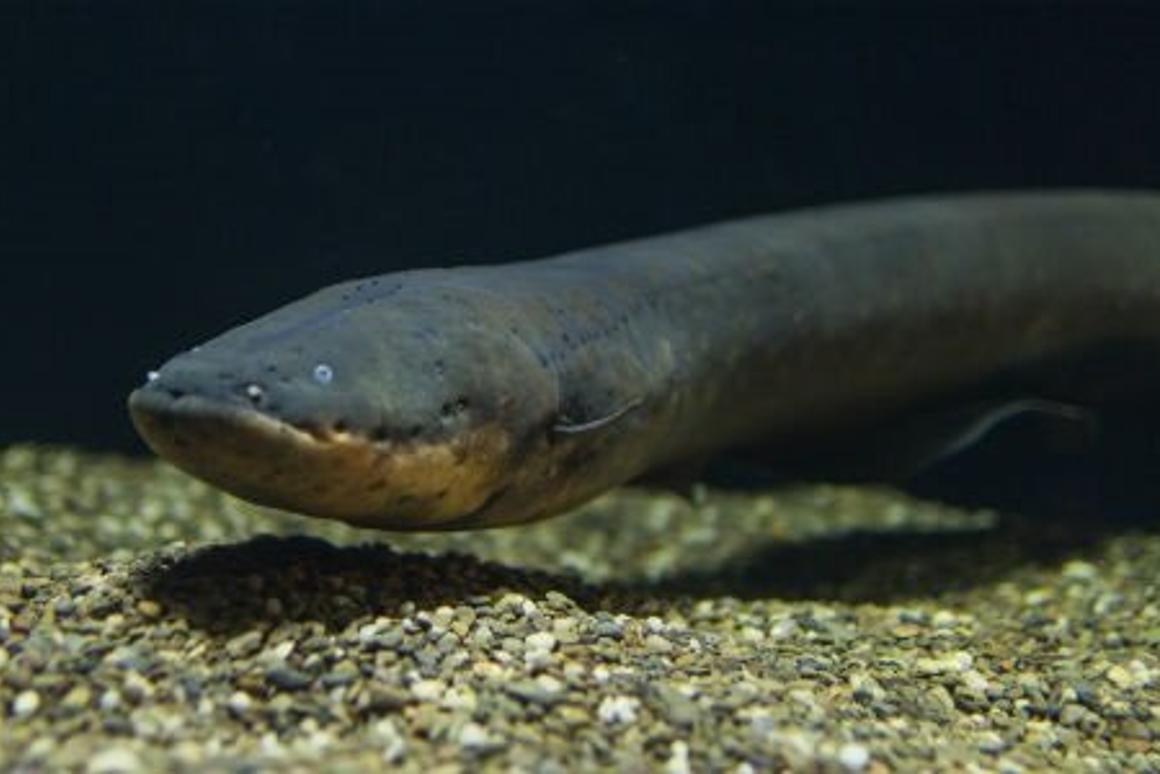 Three species of electric eel exist, not just one as previously described, and that one of them produces an electric shock up to 860 volts.

An international team of scientists led by Carlos David de Santana, an associate researcher at the US National Museum of Natural History, has found that the electric eel comes in three distinct species rather than one, and that one of these is a real shocker. Native to South America, the newly identified Electrophorus voltai can generate a record 860 volts – the highest voltage discharge of any known animal.
Found in the Amazon and Orinoco rivers in South America, the electric eel is famous for its ability to generate hundreds of volts of electricity at will. Growing to 2 m (6.6 ft) long and weighing in at up to 20 kg (44 lb), the electric eel is also unusual for being an air breathing fish that must rise to the surface every 20 minutes to get 80 percent of its oxygen, which makes them excellent for laboratory work because they can be safely removed from the water.
But it's the ability to generate electricity that is the eel's real party trick. It isn't the only fish that can do so, but the electric eel is the most powerful of all by a wide margin. Using its electric fields for navigation, subduing prey, and warding off predators, almost 80 percent of its body is made up of the three specialized organs that are its biological batteries.
When it brings its electrics to bear, the eel can stun prey or wear it out by inducing a series of involuntary muscle contractions. If you are unlucky enough to come across one while you happen to be wading through the Amazon, the jolt is like getting hit with a stun gun, which isn't pleasant, but isn't likely to be lethal.
The eel normally feeds on invertebrates, fish, and the occasional small mammal. It doesn't electrocute its prey because it doesn't generate a sustained jolt, but inflicts a series of alternating current pulses that get successively weaker because the eel needs time to recharge after an attack. Though it produces hundreds of volts, it's only about one amp, so it isn't lethal to humans unless you have a heart condition, but it's still dangerous because the victim can drown – especially if the eels attack in a group.
But it now turns out that there's more than one species of electric eel and one of these can pack quite a wallop. Technically a kind of knifefish rather than a true eel, the electric eel was first classified by Carl Linnaeus in 1766 as Electrophorus electricus and since then has been regarded as a single species.
But Santana's team took a new look at the eel by collecting 107 of the fish from different stretches of the Amazon in Brazil, Suriname, French Guiana, and Guyana. They then conducted DNA barcoding to sequence the mitochondrial gene cytochrome c oxidase I (COI), then sequenced nine other mitochondrial and nuclear genes and cross-checked them with other analyses.
The DNA showed that the electric eel is not one, but three distinct species that diverged from one another twice, first 7.1 million years ago and again 3.6 million years ago. These new species are the well-known Electrophorus electricus, which is found in northern Brazil, Guyana, French Guiana and Suriname and has a discharge of 650 volts; the Electrophorus varii that is found in the southernmost Amazon and puts out between 151 volts to 572 volts; and the Electrophorus voltai, which lives in between and punches out a record 860 volts.
The team also looked at the environments of the three eels and concluded that the amount of dissolved salts in the waters they live in may be the reason for the variance in the voltages. E. varii lives in waters that are very high in dissolved salts, so electricity is easily conducted and it needs only a low voltage, but E. voltai lives in waters with little salt, so it needs much more current to do the same job.
The team is now working on more genetic tests to look more closely at the eels' ecological separation and how this caused them to diverge from their common ancestor. They are also seeking more specimens to confirm the 860-volt record as well as to look for more possible species.
"The discovery of new electric eel species in Amazonia, one of the planet's biodiversity hot spots, is suggestive of the vast amount of species that remain to be discovered in nature," says Santana. "Furthermore, the region is of great interest to other scientific fields, such as medicine and biotechnology, reinforcing the need to protect and conserve it, and is important for studies involving partnerships among Brazilian researchers, and between us and groups in other countries, to explore the region's biodiversity."


The research was published in Nature Communications.
Source: FAPESP﻿
Posted by Tony Ogunlowo at Thursday, September 12, 2019