Iran's Rouhani rules out Trump meeting until US lifts sanctions. 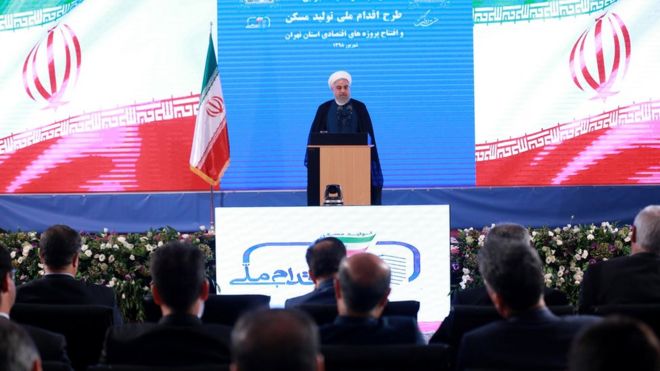 Iranian President Hassan Rouhani has urged the United States to take the first step towards dialogue by lifting sanctions against Iran.
"Without this step, this lock will not be unlocked," Mr Rouhani said.
He spoke a day after President Donald Trump said he was open to a meeting if the circumstances were right.
Tensions between the US and Iran have escalated since Mr Trump abandoned a deal limiting Iran's nuclear activities last year and reinstated sanctions.
He wants a new agreement that would place indefinite curbs on Iran's nuclear programme and also halt its development of ballistic missiles. Iran has refused.


Other world powers party to the 2015 deal - the UK, France, Germany, China and Russia - have tried to keep it alive. But the sanctions have caused Iran's oil exports to collapse, the value of its currency to plummet, and sent inflation soaring.
After the US sought to reduce Iran's oil exports to zero earlier this year, it responded by suspending some commitments enshrined in the nuclear agreement. It has threatened to go further if its economy were not shielded from the sanctions' effects.


Iran has also been accused of attacking international shipping in the Gulf region.


At a joint news conference following the G7 summit in Biarritz, French President Emmanuel Macron said he had told Mr Rouhani by telephone that he was "convinced that an agreement can be found" if he agreed to meet Mr Trump.
"What I hope is that in coming weeks... we can manage to make a summit happen."


Mr Trump said such a meeting was realistic and revealed that talks were already under way potentially to provide Iran with credit from various countries to keep its economy afloat.
"I have a good feeling. I think he [President Rouhani] is going to want to meet and get their situation straightened out. They are hurting badly."
Mr Trump and Mr Rouhani are both due to attend the UN General Assembly in New York in September. It would be the first meeting between US and Iranian leaders since the 1979-81 US embassy hostage crisis.


Mr Rouhani said that if Mr Trump's only concern was Iran gaining nuclear weapons, there was "nothing to worry about".
"We're not after weapons of mass destruction, neither atomic nor chemical, and not because of your frown and admonition, but because of our beliefs and morals and the [Supreme] Leader's fatwa."
Iran's Supreme Leader, Ayatollah Ali Khamenei, reportedly issued a religious edict in 2003 saying the country rejected nuclear weapons. But the international community did not believe that Iran was not seeking to develop a nuclear bomb and negotiated the 2015 deal in an effort to prevent it from being able to do so