Freddie Starr buried in a coffin marked " Return To Sender".

Freddie Starr died aged 76 in May. Fans began gathering outside Prescott Church earlier today, many honouring the family’s wishes by wearing bright red clothing or red roses in their buttonholes, a nod to Freddie’s favourite red Teddy Boy jacket. Derek Acorah, 69, was pictured arriving wearing a brightly coloured red tie. One woman was pictured carrying a long-stemmed red rose and wearing a T-shirt bearing the star’s name and picture, along with the message: “RIP.” A man paid tribute to Freddie in a bright red jacket.

The crowd congregated outside the church in Liverpool, bracing themselves against the rain in order to pay their respects.The comedian’s coffin bore one final joke, engraved with the words: “Return to sender”.
Freddie’s family asked mourners to mark the occasion wearing red ties or roses “to reflect the colour of his favourite red Teddy Boy jacket made famous in his TV and stage shows”.
The family said in a statement: “The extended family of Freddie Starr would like to thank his many friends and fans for their kind an comforting words following his sad death last month.”
They asked that, instead of flowers, donations be made in Freddie’s memory to Alder Hey Children’s Charity.
Freddie’s coffin was carried in to the church by pallbearers wearing red ties.
He was to be laid to rest next to his mother’s grave.
After a kind stranger, funeral director Michael Fogg, offered to cover all the costs of flying Freddie Starr back to the UK and burying him in his hometown of Huyton, Liverpool, they added: “His family would also like to put on record our thanks to funeral director Michael Fogg for al his help and support at this difficult time.”
Michael previously told the Liverpool Echo why he had made the generous offer, saying: “He should be back with the people he loved and back with family. 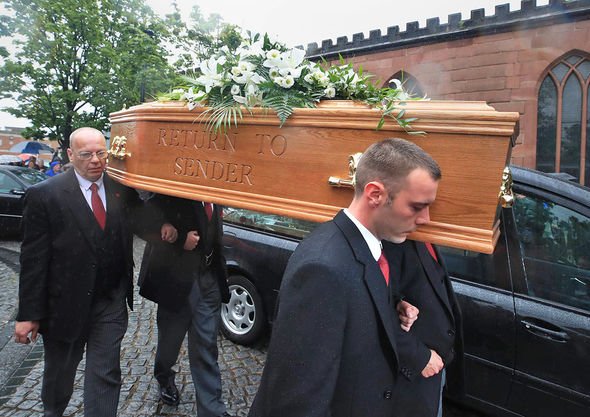 “He shouldn’t be buried in a foreign land. He should be brought back to be in his own country.

“Freddie Starr was much loved buy the people in this country and he deserves a proper send off,” he added.
Freddie was found dead at his Spanish apartment on the Costa Del Sol on May 9.
The Opportunity Knocks star’s cause of death was later confirmed by a police insider, who told the Metro he had died from a heart attack.
“There is absolutely no doubt about,” the source said.
“He had a history of heart problems and the autopsy revealed a heart attack was the cause of his death.”
Following news of the comedian’s death, one of his neighbours told The Mirror Freddie’s carer had found him dead in his home.

He started off as the frontman of the Midniters in the 1960s.
He later found fame after starring on Opportunity Knocks and the royal Variety Performance.
His successful career declined in the 1990s and he later made a comeback when he signed up for a stint in the jungle on I’m A Celebrity… Get Me Out Of Here! in 2011.
However, he was forced to leave the show amid reports producers were concerned for his health.
Freddie had undergone a quadruple bypass the year before.