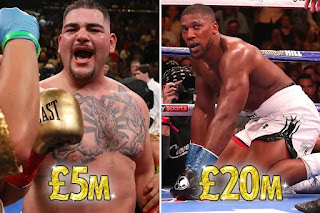 Andy Ruiz Jr might have produced one of the biggest upsets in heavyweight history on Saturday, but his pay cheque was distinctly lightweight, compared to Anthony Joshua’s.

Ruiz is understood to have made only around £5m from the fight despite taking home Joshua’s three belts.

He took the fight with just five weeks’ notice after Joshua’s original opponent Jarrell Miller failed three drugs tests in the build-up.
The cash is the largest purse of Ruiz’s career. His previous biggest payday came in at a reported £770,000 for his defeat by New Zealand’s Joseph Parker in 2017﻿
Posted by Tony Ogunlowo at Monday, June 03, 2019