Musk shares pictures of 60 'WIFI' satellites strapped to a rocket.

Elon Musk's plan to beam high-speed internet to Earth using thousands of satellites is expected to launch tomorrow, according to a twitter post from the CEO.

The SpaceX CEO shared a photo on the social media platform showing a rocket packed full with what he called the 'first 60' satellites.
It is the first mission of Starlink, the billionaire's project to bring high-speed internet coverage to the globe through orbiting satellites.
Musk had originally tweeted that if conditions were right the launch would take place today, but a later comments put the date of launch to Wednesday.

In his original post, Musk wrote: 'First 60 @SpaceX Starlink satellites loaded into Falcon fairing. Tight fit.'
Alongside, he posted two pictures, the first showing a satellite-packed rocket and the second of his own Tesla car inside a rocket - to demonstrate the internal size of the spacecraft.
'Much will likely go wrong on first mission,' Musk wrote on Twitter, adding that it would take six more similar launches to reach 'minor' broadband coverage and 12 for 'moderate' service.
In his latest comment on the post thread, he added: 'More details on day of launch, currently tracking to Wednesday.'
The Tesla CEO first posted the picture of his red sports car in 2017 on Instagram. 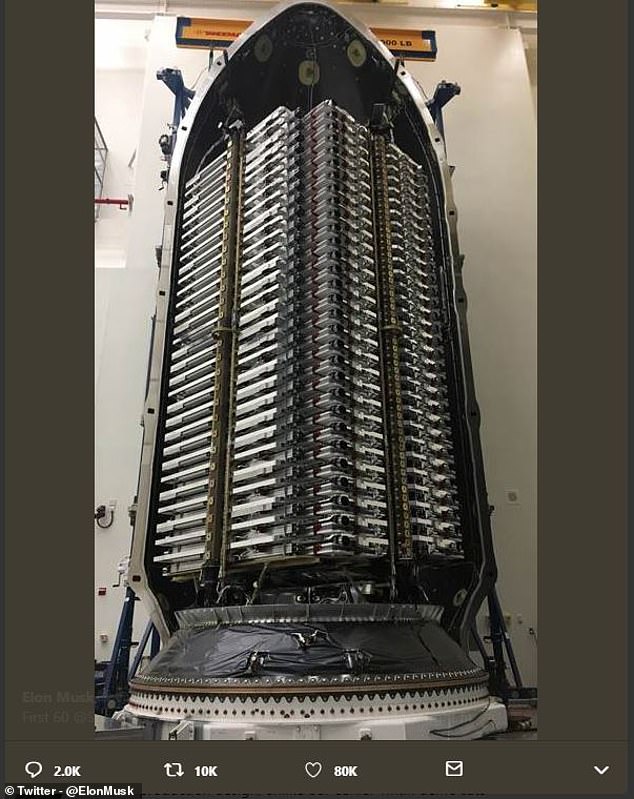 The SpaceX CEO shared the above photo on Twitter showing a rocket packed full with what he referred to the 'first 60' satellites. It is the first mission of Starlink, the billionaire's project to bring high-speed internet coverage to the globe through orbiting satellites
﻿
The planned launch is part of SpaceX's multibillion-dollar Starlink project, which has been approved by the US communications agency, to send almost 12,000 satellites into space.
A previous demonstration of prototypes called Tintin A and B was carried out in February 2018 with coverage good enough to play fast response video games, according to Musk.
The latest satellites have a production design unlike the earlier models, though Gwynne Shotwell, SpaceX's president and chief operating officer, reportedly told attendees at the recent Satellite 2019 conference that these will still be scaled down without intersatellite links and will not start launching satellites for actual service until later this year.

According to an announcement from Ms Shotwell, the company will launch dozens of satellites into space as a beginning demonstration for the Starlink project.
The preliminary launches will deploy pared down versions of its satellites that will function more as a test, she said.
Notably, the trial versions will lack the ability to communicate with one another - a feature that will help full-fledged satellites avoid colliding into each other.
'This next batch of satellites will really be a demonstration set for us to see the deployment scheme and start putting our network together,' Ms Shotwell said at the conference in Washington, DC, as reported by SpaceNews.
She added the company could conduct as many as six launched this year depending on how the upcoming demonstration launches go.

Recently, Starlink received re-approval from the FCC to get the project underway after altering its plans to launch satellites last month.
According to the company, it had to readjust its plans to avoid orbiting space junk that could damage the devices.
The modified plan would launch more than 1,500 of the satellites at around 342 miles (550km) above Earth.
According to FCC filings, in total, SpaceX's Starlink project could eventually include as many as 12,000 satellites orbiting just above Earth's atmosphere and offer users speeds as high as 1GBPS with a latency as low as 25ms.
While Starlink will pioneer the novel way of providing domestic internet, it will be far from uncontested in its plans.
Amazon unveiled its intentions behind a mysterious plan, dubbed Project Kuiper, initially announced last September which will launch 3,236 satellites into low-orbit around the Earth.
Project Kuiper has yet to receive regulatory approval for its project and hasn't yet provided a timeline for when satellites might enter orbit.

Another competitor, the London headquartered company, OneWeb, launched its first six successful satellites in February and has raised a formidable $1.25 billion (£970 million) to support future launches.
Perhaps the biggest indicator that the race to provide widely available satellite-based internet is in full swing is a recent spat between OneWeb and SpaceX.
In a complaint to the FCC, OneWeb and satellite broadband competitor Kepler Communications, alleged that SpaceX's Starlink plans would interfere with their operations by crowding Earth's orbit with satellites.
The FCC, however, ruled in favour of SpaceX citing the ability of the company's satellites to manoeuvre around objects.
One major concern regarding the new wave of satellites is the potential to greatly increase the amount of space junk orbiting Earth.
Already, an array of junk from launches and satellite collisions blankets Earth's orbit, threatening to derail future launches and endangering current orbitals like the International Space Station.