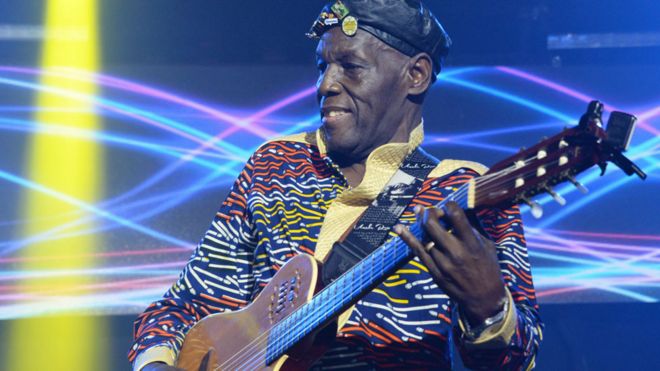 Oliver Mtukudzi, one of Zimbabwe's most renowned musicians, has died aged 66 after a four-decade career.

He came to prominence in the 1970s as one of voices of the revolution fighting white-minority rule.
His lyrics often carried social messages about HIV/Aids and coded political commentary.
His 2001 song Wasakara, meaning "You Are Too Old", was banned as it was seen as a reference to leader Robert Mugabe, who was ousted 16 years later aged 93.
The singer and guitarist mixed several different styles to create his own distinctive Afro-jazz sound, known to his fans as "Tuku Music".
In a long career he released 67 albums and toured the world.

'He was a freedom fighter'

US-based Zimbabwean musician Thomas Mapfumo, with whom he started his career prior to independence in 1980, paid tribute to a "great musician".
"He was a freedom fighter - that's what I can say about him," Mapfumo told the BBC's Focus on Africa radio programme.
"I loved his voice and the way he used to write his music. He was such a great inspiration to those who were upcoming."
Mtukudzi performed one of famous tracks Neria, about the strength of women and how they should take their place and not feel inferior to men, for the BBC in 2009:

End of Youtube post by BBC News Africa
Affectionately known as "Tuku", his name is trending on Twitter as people pay tribute to him.
But as Zimbabweans come together to mourn the musician, correspondents say there are fears the government will use his death to divert attention from the brutal crackdown on protesters and the country's economic woes.

By Stanley Kwenda, BBC Africa
Oliver Mtukudzi's last album was filled with emotion. Called Hanya'Ga, which translates as "Concern" in the Shona language, it came out last February - three months after Mr Mugabe, who had ruled Zimbabwe for 37 years, was ousted.
It felt like he had taken his gloves off and was able to express his real concerns about the country's future. From child marriage to the economic meltdown and worries about a lack of concern for human life - he tackled it all.
It was a rallying call for unity among Zimbabweans - a wake-up call to do something to stop the rot that had characterised the country for many years. It was also a letter to the government - a cry for help.