Donald Trump has bragged about serving a table groaning with McDonalds ‘hamberders’ to a football team visiting the White House. In a misspelt tweet issued Tuesday, the president wrote: ‘Great being with the National Champion Clemson Tigers last night at the White House. ‘Because of the Shutdown I served them massive amounts of Fast Food (I paid), over 1000 hamberders etc.

‘Within one hour, it was all gone. Great guys and big eaters!’ Trump’s mistake, and the tone of the tweet itself was quickly mocked, with many accusing the president of setting up the fast food banquet as a stunt. Burger King – which also supplied food for Monday’s gathering, also joined in the fun, with the chain’s official account tweeting: ‘due to a large order placed yesterday, we’re all out of hamberders. just serving hamburgers today.’ 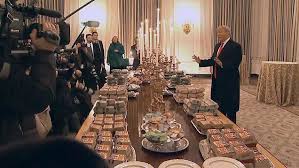 Critics said he did so to try and appear more in-touch with hard-hit Americans during the longest US government shut-down in history.  The closure, now in its 25th day, has left around 800,000 government workers without paychecks, with White House chefs among those on an enforced break from their jobs. It has been prompted by Democrats’ refusal to stump up the $5.7billion Republican Trump has demanded to fund his border wall, which would stretch across America’s southern states.

Trump explained his decision to serve fast food to the South Carolina based tigers, who won last year’s College Football Playoff National Champions. The president’s spread also included treats from Wendy’s, Pizza Hut and Burger King. He said: ‘I would think that’s their favourite food. ‘We ordered American fast food. Paid for by me. Lots of hamburgers, lots of pizza, I think they’d like it better than anything we could give. ‘We have some very large people that like eating, so I think we’re gonna have a little fun.’ He said he ordered 1,000 hamburgers to the White House along with chicken nuggets and pizza.

Trump added: ‘I had a choice: do we have no food for you, because we have a shutdown, or do we give you some little quick salads that the first lady will make along with the second lady, they’ll make some salads. And I said, you guys aren’t into salads.’ The president’s own love of McDonald’s is well-documented. Michael Cohen’s explosive tell-all, Fire and Fury: Inside the Trump White House, claims Trump loves McDonald’s because he is terrified of being poisoned, and knows he can order the food discreetly without anyone knowing who it is being prepared for. Cohen’s heavily-denied book also claimed that Trump enjoys spending his evenings devouring cheeseburgers in bed while watching multiple televisions at once – preferably those broadcasting shows about his own presidency.