Special forces regain control of ship after staff were threatened by stowaway migrants .

Four men have been arrested after special forces stormed a cargo ship off the UK's coast, where a group of stowaway migrants had threatened staff on-board.

Special Boat Service (SBS) operatives from Sabre Squadron fast-roped from helicopters on to the ship, which had been sailing in the Thames Estuary, sources told Sky's defence and security correspondent Alistair Bunkall.
The operation lasted around 25 minutes and no one on board was injured.
Essex Police said the vessel was taken to the Port of Tilbury and four men were arrested under the Immigration Act when the ship docked just after 4.20am this morning. 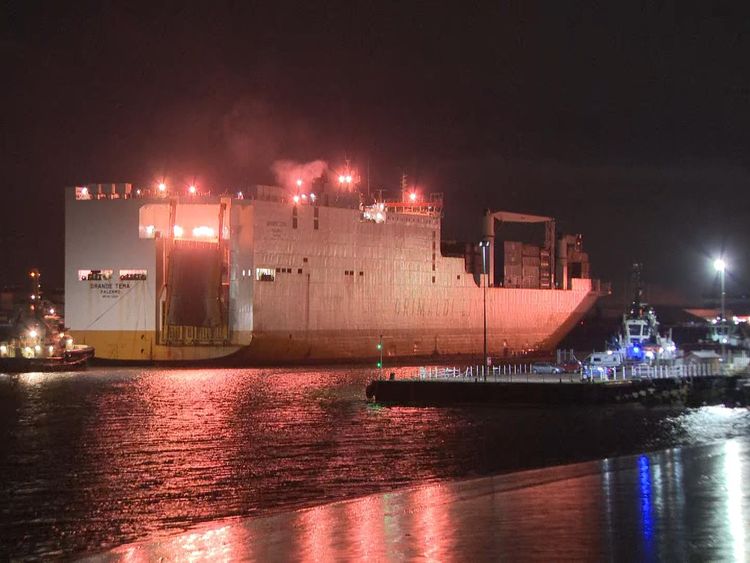 Officers boarded the 236-metre long cargo ship, called the Grande Tema, shortly after 11pm last night.
Its operator, Grimaldi Lines, had earlier reported that four stowaways armed with iron bars demanded for the crew to navigate closer to the coast.
The Home Office has told Sky News that the men presented themselves as Nigerian and Liberian nationals.
The company's spokesman Paul Kyprianou told Sky News: "The vessel was coming from Nigeria... They managed to escape from the cabin and started threatening the crew, requesting to have the vessel navigate very close to the coast.
"We understand they wanted to jump and reach the British coast."
He added that the crew locked themselves in the bridge of the vessel after the migrants had picked up potentially harmful objects.
"They managed to get whatever they could find on the vessel... pieces of iron, tubes and things like that and this is what they used in order to threaten," Mr Kyprianou said.
The stowaways were found on the ship five days ago and were given food and water and placed in a cabin.
They became threatening on Friday morning as the vessel travelled eastwards through the English Channel.
Maritime navigational tracking sites showed the vessel circling around a position north east of Margate in Kent.
Essex Police said they were not treating the incident as a "hostage, piracy or terror-related".
The men are being interviewed and will have their cases processed by the Home Office.