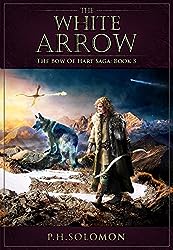 This unique epic fantasy will keep you turning pages as Athson marches toward his inevitable destiny.

With the Bow of Hart in hand, Athson is hunted by his enemies. His mistakes haunt him as much as his past.

But when the arrow arrives, it is from a most unexpected source and lands in unforeseen hands. Events twist like an arrow in flight.

Can Athson overcome his past and his failures to use the Bow of Hart as intended against Magdronu? The archer and the bow await the coming arrow…

Pick up the last book of The Bow of Hart Saga because it's "fabulous conclusion to an epic fantasy tale."


This is BOOK THREE of The Bow of Hart Saga. The other two books have been released:
BOOK ONE: The Bow of Destiny
BOOK TWO: An Arrow Against the Wind
Reactions to The White Arrow:
"Fabulous conclusion to an epic fantasy tale. It made me laugh, cry, cheer, want to throttle characters, and beam with pride and hope." - ★★★★★ Amazon Review