NASA's gargantuan Mega Moon Rocket could head to space as soon as Aug. 29 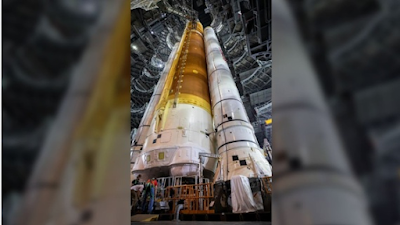 for the first time in 50 years, including the first woman and person of color to set foot there — could launch as soon as late August, agency officials said in a news briefing on Wednesday (July 20).

The first phase of the mission, dubbed Artemis-1, will see NASA's massive new Space Launch System (SLS) launch on a four-to-six-week-long trip around the far side of the moon and back. NASA has eyed Aug. 29, Sept. 2 or Sept. 5 as the earliest possible launch dates for the mission, NASA associate administrator Jim Free told reporters.

The precise date of the mission will be announced about a week in advance, NASA added.

The Artemis-1 mission will be totally uncrewed, with an empty Orion crew capsule riding atop the tip of the SLS. According to Artemis mission manager Mike Sarafin, the main objective of the mission is to test the effectiveness of Orion's heat shield, which will be subjected to temperatures about half as hot as the sun as the capsule plunges through Earth's atmosphere during the reentry phase of the mission.

NASA plans to recover the capsule after it splashes down into the ocean, then thoroughly study its wear and tear before allowing astronauts to ride aboard it on future launches. Artemis-2 will be the mission's first crewed flight, flying astronauts around the moon but now landing there. Artemis-3 will see astronauts touch down at the lunar south pole, with the goal of establishing a permanent base there.

The success of the mission hinges on the performance of the meaty SLS rocket (also known as the Mega Moon Rocket). One month ago, in mid-June, NASA rolled the rocket onto the launchpad for a "wet dress rehearsal" meant to simulate an actual launch up to the final 9 seconds before liftoff. However, the launch was aborted with 29 seconds left on the countdown clock due to a hydrogen leak within the rocket.

Despite this early end to the rehearsal, NASA officials said that the SLS met about 90% of its pre-launch objectives, with only a few kinks left to iron out. Since then, engineers have replaced the faulty seals that allowed the hydrogen leak, NASA said.

Standing 322 feet (98 meters) tall when capped with the Orion crew capsule, the SLS is taller than the Statue of Liberty and weighs a massive 5.75 million pounds (2.6 million kilograms), according to NASA. While the SLS is slightly shorter than NASA's Saturn V rocket, used during the Apollo missions of the 1960s and 70s, it is considerably stronger, capable of delivering about 8.8 million pounds (4 million kg) of thrust, or 15% more than the Saturn V's 7.5 million pounds (3.4 million kg).

According to NASA, the SLS is the most powerful rocket ever built.