Archaeologists may have discovered the palace of Genghis Khan's grandson 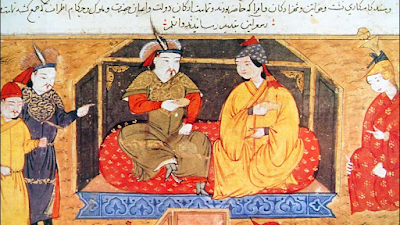 The remains of a once resplendent palace built for Hulagu Khan, a grandson of Genghis

Khan, may have been discovered in Van Province in eastern Turkey, a team of archaeologists suggests.

However, researchers not associated with the research urged caution, saying that more information is needed before the structure can be tied to the Khan family.

Hulagu (also spelled Hülegü) Khan was a Mongol leader who lived from circa A.D. 1217 to 1265 and led military expeditions in the Middle East. He was well known for the sack of Baghdad in 1258 that led to the destruction of much of the city — including the House of Wisdom, also known as the Grand Library of Baghdad — and the execution of Baghdad's leader, Caliph Al-Musta'sim Billah.

The unity of the Mongol Empire ended in 1259, after the death of Möngke Khan, another grandson of Genghis Khan, and a smaller Mongol Empire led by Hulagu Khan, which is called the "Ilkhanate" (also spelled Il-khanate) formed in the Middle East. The Ilkhanate was short-lived and collapsed in the early 14th century, with the last remnants destroyed in 1357.

Historical records mention a palace and summer capital in the region, but don’t specify exactly where. Excavation of a palace is ongoing, but it appears to be heavily looted. "The remains of the Khan's palace complex [are] now fully ruined," excavation team member Munkhtulga Rinchinkhorol, an archaeologist with the Mongolian Academy of Sciences, told Live Science in an email. Despite the looting, the team has found the remains of glazed roof tiles, bricks, tri-colour-glazed ceramic potteries and porcelain.

An important find is that some of the roof tiles have "'s'-like symbols on the roof-ending tiles,"  Rinchinkhorol said. Known as the "svastika pattern or tamga" they are "one of the power symbols of the Mongol Khans," he said.

Various forms of svastika patterns were used in ancient and medieval times and a version of them was appropriated by the Nazis in the 20th century. The tiles with these symbols are an important reason why researchers believe that they have found a palace which belonged to Hulagu Khan, Rinchinkhorol noted. The artifacts, combined with historical records mentioning a strong Mongol presence in the area, lead researchers to believe that the palace dates to the time of the Ilkhanate.

Live Science contacted a number of experts not affiliated with the research to get their reactions to the discovery.

"It is possible that it is Hülegü's palace," Timothy May, professor of Central Eurasian History at the University of North Georgia, told Live Science in an email, saying that more information is needed before it can be known for certain. "The scholars involved are very good and may be correct," May said.

Other scholars expressed similar views. The discovery is "exciting" but more information is needed, Michael Hope, chair of Asian Studies at Yonsei University in Korea, told Live Science in an email. There are some historical accounts that may mention this palace. The 13th-century Armenian historian, Kirakos of Ganja (lived circa A.D. 1200 to 1271), mentioned a palace that lay somewhere between Lake Van and Lake Urmiya, Hope said. Another Armenian historian named Grigory of Akancʿ (lived circa A.D. 1250 to 1335) mentioned that the Ilkhanate constructed a summer capital northeast of Lake Van at Ala Taq, which likely included a palace, Hope noted.

What is known for certain is that this region was an important area for the Mongols, "so we should not be surprised to find ruins of Ilkhanid caravanserais and small settlements, perhaps even palaces in the region," Hope said. "Whether this is the palace of Hülegü described by Kirakos remains to be seen. I certainly wouldn't rule it out, but I am hungrily waiting for more information," Hope said.

Research at the site is being conducted by a joint Turkish-Mongolian team. A report on the research will be prepared in the next few months, Rinchinkhorol said.

Email ThisBlogThis!Share to TwitterShare to FacebookShare to Pinterest
Labels: History