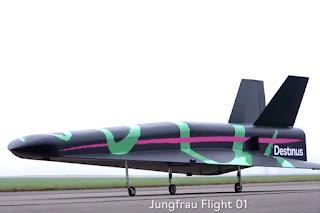 After just 4 months, Destinus has flown its first prototype, the size of a car. Another is coming, which the company says will be the size of a bus
Destinus
Described by his PR team as "like Russia's Elon Musk," serial entrepreneur Mikhail Korkorich says his new company Destinus is building a hydrogen-powered, zero-emissions, transcontinental cargo drone capable of hypersonic Mach 15 cruise speeds.
This Hyperplane, according to Destinus, would "combine the technological advances of a spaceplane with the simple physics of a glider to create a vehicle that meets the demands of a hyper connected world," blasting cargo between Europe and Australia in just a couple of hours using clean liquid hydrogen fuel.

A fully autonomous machine, the Hyperplane would take off from regular airport runways and fly slowly to the coast before accelerating to supersonic speeds. In an interview with DroneTalks, Korkorich explained that this would be done using a "first stage air turbo rocket engine, which is, I would say, a known technology."

It would then ignite its second stage, a rocket engine, to accelerate to hypersonic speeds between Mach 13 and Mach 15 at mesospheric altitudes over 50 km (160,000 ft) where air resistance is greatly reduced.

"The logic is simple," said Korkorich. "If you want to move something from one place on Earth to another place on Earth, you need to spend energy in several directions. One, you need to overcome gravity as long as you're keeping the plane in the air. So, longer means more gravity losses. Second is against the friction of the air, and third is for your maximum velocity kinetic energy.

"Yes, we need to accelerate our vehicle to a very high velocity with the rocket engine. So we need to spend more energy for acceleration. But because we are flying 10 times faster, and because we are flying at extremely high altitudes ... where there's more than 10 times less air than at 10 km (33,000 ft), our gravity losses and our aerodynamic losses are extremely low. So overall it starts to be very appealing. Actually ... we can move stuff from here to another continent cheaper than normal planes. It sounds strange, but it isn't; we just spend less energy for this."

Most of the high-speed cruising would be done in the thin air of the mesosphere, above 50,000 m
Destinus

In order to get there, Korkorich says one key step will be developing a rocket engine that's "almost as re-usable as a jet engine," as well as a hydrogen cooling system that can stop the aircraft's structure from melting under the "dozens of megawatts per square meter" of heat that hypersonic vehicles produce pushing through even the low-density air at mesospheric altitudes.

Korkorich says the plan is to start out moving urgent, high-value premium cargo – medical deliveries, secure documents, critical infrastructure parts – but that eventually "amazing tuna from the Mediterranean will be in the kitchen of Japanese restaurants as fresh as if it's just been caught, eventually at the same price." By flying way up in the mesosphere, Korkorich says the Hyperplane will generate "10 times less" sonic boom noise.

Destinus says it's opened four offices, in Spain, France, Switzerland and Germany, and raised some pretty decent capital to get started, but that it will need a lot more. "The capital requirements are immense," reads a company blog post. "Kokorich estimates that he will need more than a billion francs before Destinus is profitable. The first financing round of eleven million this spring was completed in one afternoon, and the investors – most of whom knew Kokorich from his previous companies – only needed a few presentation slides." The company expects another imminent 25-million round to come in just as easily. "It's a huge bet Kokorich is making," continues the blog, "with enormous potential and unclear chances of success."

Within just four months of starting out, the company says it has already flown its first prototype, called Jungfrau, and presented it in a video published on LinkedIn. The test flight, completed near Munich, lasted five minutes, and focused on "how the hypersonic aero shape would operate at low speeds during the critical phases of take-off and landing." Thus, the Jungfrau, "about the size of a car," was kept below 150 km/h (93 mph) and under 20 m (66 ft). "The next one will be ready in early 2022," says Destinus, "and it will be the size of a bus."

OK, let's pump the brakes here for a second, because there are enough big buts here for Sir Mixalot to while away his twilight years in a land of plenty.

The first is that Jungfrau prototype, which looks very similar to another design: the LAPCAT MR2.4 hypersonic cruiser concept, developed as part of an EU research program and the subject of the Horizon 2020 Stratofly feasibility study. The MR2.4 was designed to be a 300-seat passenger plane, mind you.

Destinus says Jungfrau uses "an aero shape based on a hypersonic design," so it's not claiming that this design is completely original. But why build a prototype – the size of a car, no less – that doesn't represent the aircraft you're actually going to make? What's really being tested in the upcoming "intensive test campaign?" What engines does it use? They sound like jet turbines to us, and we can't find footage of an air turbo rocket for comparison.

That's probably because, while they're perhaps a "known technology," as Kokorich suggests, they haven't exactly caught on at this point. "I can only say this," said Matt Thomas of CFD Research Corporation, who has spent more than 30 years researching, developing and building air turbo rockets, and worked on designs for both AMCOM and CFD. "I obviously don't follow the literature day to day, but many different people have looked at derivatives that could be considered related to the air turbo rocket. The English have dome some things, the Russians have done a few things. I've never seen it hit pay dirt, where you're seeing them flying on a day-to-day mission."

That's not to say it couldn't happen, particularly with hydrogen as a fuel. "The Japanese actually did a really good job on a hydrogen fuel regeneration ATR," said Thomas. "They got it working pretty good. But that's about the easiest propellant you could find. Anybody could get a hydrogen regen ATR going. It's not that tough." So essentially, it's possible, but nobody's managed to commercialize anything as yet, and it likely represents a major hurdle.

Then there's Kokorich himself. He certainly seems to have some experience in business and aerospace, having launched dozens of companies, including Dauria Aerospace, Russia's first private micro-satellite manufacturer, and American startup Momentus Space, a Y Combinator graduate-turned-SPAC-listed company dedicated to last-mile delivery in space.

But recently, it's hard to find a mention of his name not linked to some controversy or another. Take the Momentus SPAC listing; the SEC alleges Kokorich and the Momentus team lied to the company about to acquire it about its "unique water-based propulsion system," saying it had been successfully tested in space when the only space-based test had failed.

He's been described by Tech Times as "an unscrupulous entrepreneur who seems to be in hot water with the US officials all the time," and has been repeatedly been rebuffed by US officials as a potential national security risk due to some of the relationships he has with businesspeople back in the old country. As a result, he had to resign as CEO of Momentus, and is now not allowed to know about the tech his own company is working on. Kokorich has explanations, and Europe is not America, but there's a fair bit of smoke around him.

And then there's the very idea of a hypersonic delivery plane. Not only are hypersonic aircraft insanely challenging to build, but anything moving at that speed carries enough kinetic energy to double as an absolutely devastating weapon.

As our own David Szondy pointed out in his excellent hypersonic explainer piece from 2017: "The kinetic force of a hypersonic projectile can give it the punch of a small tactical nuclear weapon without an ounce of explosives aboard. Small wonder the US Air Force called its '80s project to drop tungsten arrows from space 'rods from God.' Zeus didn't have such thunderbolts ... All that speed and all that inertia turns any research platform, recon unit, or passenger aircraft into a potential kinetic weapon. They don't need high explosives to destroy a target. All they have to do is hit it. In other words, any hypersonic vehicle is an intrinsic weapon given the proper modifications."

Do these concerns mean Destinus is destined for failure? Not necessarily, but like any commercial hypersonic venture, it's a long shot at best. Heck, as well-funded, well-connected company Aerion recently found out, it's insanely difficult just getting a supersonic civilian aircraft project together.

Check out a short video below.