Chinese tokamak keeps plasma 2.6 times as hot as the Sun for 17 minutes 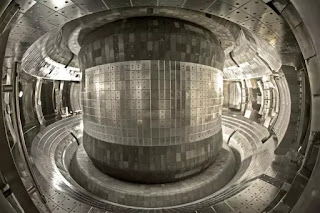 The donut-shaped chamber of China's Experimental Advanced Superconducting Tokamak reactor
IPP
Good news for fusion energy progress and a new world record for the Chinese Academy of Sciences, as its Experimental Advanced Superconducting Tokamak (EAST), or "artifical sun," maintains 70 million degrees Celsius (126 million °F) for 1,056 seconds.
High-temperature plasma is a critical part of many large-scale fusion energy initiatives, which attempt to replicate some of the conditions that make the Sun a powerful enough fusion reactor to warm our solar system, with the goal of eventually supplying safe, clean energy for humankind.

Heat can be viewed as an energetic vibration of atoms, and this vibration becomes so extreme at ultra-high temperatures that atoms begin to randomly smash into one another with enough speed to jam their nuclei together, fusing them together and crA small proportion of this eventually reaches us here on Earth as electromagnetic radiation, supplying us with visible light, ultraviolet light, infra-red, radio waves, X-rays and gamma rays, and without this generous solar gift of energy, life as we know it would never have been possible.

Tokamak-style fusion reactors like the International Thermonuclear Experimental Reactor (ITER) obviously don't have the colossal scale and gravity of the Sun, but they aim to heat up hydrogen atoms – specifically, deuterium and tritium isotopes – to a point where they begin smashing together, fusing and releasing energy that can both be harvested, and sustain the reaction as additional hydrogen atoms are fed in.

The latest experiment tested the Chinese tokamak's capability to endure extreme temperatures over longer periods, sustaining a temperature 2.6 times hotter than the Sun's core for some 1,056 seconds, or 17 minutes and 36 seconds. Nobody's ever sustained a high-temperature plasma for 1,000 seconds before, so this is an important milestone.

It's natural to wonder how these insane temperatures can possibly exist on Earth without causing the entire tokamak facility to melt down or burn to a crisp. Essentially, the donut shape of the tokamak's inner chamber is lined with the most heat-resistant materials available – tungsten and carbon, for example. Since even these would be destroyed if exposed to hundreds of millions of degrees, the superheated plasma is squashed right into the middle of the chamber, as far from the walls as possible, using powerful magnetic fields.

Most importantly, though, these extraordinary temperatures are achieved in a tiny amount of plasma relative to the size of the chamber, so the energy dissipates rapidly before it reaches the walls.

It's important to clarify: EAST has not created a fusion reaction here, just a sustained, superheated plasma similar to the kind that will eventually be used to create fusion. So it's a long way from being energy-positive at this point. Tokamak-style fusion is still many years from that lofty goal at this point, and the globe-spanning ITER project has already been described as the most expensive science experiment of all time and the most complicated engineering project in human history, since even when it does generate heat from fusion reactions, it'll vent that heat rather than attempt to capture and use it.

Indeed, we'll likely have to wait for a "DEMO" class successor to the ITER facility, like the one planned by EUROfusion, before we see a large tokamak generating useful amounts of electricity. Where ITER is shooting for a Q value of 10 – putting in 50 MW of thermal energy and generating 500 MW of gross thermal output, the EU's DEMO reactor aims to put in 80 MW and generate some 2 GW for a Q factor of 25.

That's currently planned to begin operation in 2051. Ah well, 29 years away is better than 30.

If you're using lightweight atoms from the lower end of the periodic table – like the Sun does, fusing hydrogen into helium – the new atom weighs less than the original two combined, and the difference in mass is ejected as thermal energy. At the core of the Sun, temperatures around 27 million °C (48.6 million °F) fuse about 620 million metric tons of hydrogen into about 616 million metric tons of helium every second, converting some 4 million tons of matter into energy.