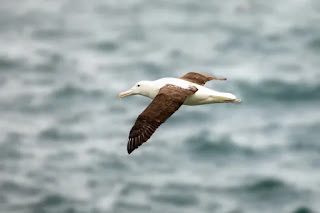 Solar heating of the black wings of birds such as the albatross may improve their lift-to-drag ratio
magann/Depositphotos
If you were a bird, chances are that you'd want to minimize the number of times you had to land and rest on the potentially treacherous ocean. A new study now suggests that multiple seabird species have thus evolved dark-colored wings, in order to stay aloft longer.
The study was conducted by scientists from Belgium's Ghent University, the Von Karman Institute for Fluid Dynamics, the Katholieke Universiteit Leuven, the Royal Belgian Institute for Natural Sciences, and Illinois-based Northwestern University.

Multiple types of black-winged seabirds were placed in a wind tunnel at the Von Karmen Institute, where their black wing feathers were warmed via radiative heating – this is the same manner in which they would naturally be warmed by the sun. It was found that the warmer those feathers, the better the birds' flight efficiency. More specifically, their ability to glide without a substantial loss of altitude improved by up to 20 percent.

This finding supports previous research, which showed that the heating of an airfoil boosts its lift-to-drag ratio. Putting it simply, the higher that ratio, the more efficient an aircraft – or bird – is at flying.

The scientists went on to determine that over time, the increasing amounts of melanin (dark pigment) in seabirds' wings "followed an evolutionary trajectory" similar to that of other traits associated with improved flight efficiency.

And yes, it's possible that we could eventually be seeing an increasing number of black-winged airplanes. "These findings may also serve as a guide for bioinspired innovations in aerospace and aviation, especially in low-speed regimes," the researchers stated.

A paper on the study was recently published in the Journal of the Royal Society.