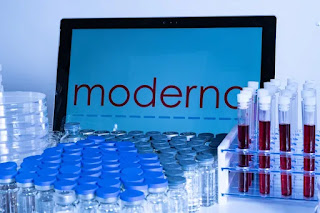 Moderna is one of two companies starting first phase human trials testing mRNA flu vaccines
goldenshrimp/Depositphotos
Biotech firm Moderna has commenced human trials testing an mRNA influenza vaccine targeting four separate viral strains. Building on its profoundly successful mRNA COVID-19 vaccine, the company is ultimately planning to develop a single vaccine against multiple respiratory viruses.
It is impossible to understate the incredible success of mRNA vaccines over the past year. The stunning efficacy of this vaccine technology against SARS-CoV-2 is offering the world a path out of this global pandemic. And the technology is now rapidly moving forward on another problematic viral disease, influenza.

The Phase 1/2 trial is taking place in the United States and is designed to primarily evaluate the vaccine's safety and ability to generate an immune response, or immunogenicity. The plan is to ultimately recruit around 180 subjects over the coming months.

Currently available flu vaccines are only around 50 percent effective and they are reformulated every year to target the three or four influenza strains predicted most likely to spread. However, these formulations are decided up to nine months in advance because the mode of production takes time. One of the strengths of mRNA vaccines is how quickly they can be developed once a problematic viral strain has been detected.

Stéphane Bancel, CEO of Moderna, says the plan is to not only develop an effective multi-strain influenza vaccine but to incorporate other viral antigens into the one shot to generate a combination vaccine protecting against a number of respiratory viruses.

“We believe that the advantages of mRNA vaccines include the ability to combine different antigens to protect against multiple viruses and the ability to rapidly respond to the evolution of respiratory viruses, such as influenza, SARS-CoV-2 and RSV,” says Bancel. “Our vision is to develop an mRNA combination vaccine so that people can get one shot each fall for high efficacy protection against the most problematic respiratory viruses.”

The beginning of Moderna’s trial follows the recent commencement of another Phase 1 mRNA influenza vaccine trial. Developed by mRNA therapeutic company Translate Bio, and accelerated by pharma giant Sanofi, this vaccine focuses solely on the H3N2 strain of influenza.

The Translate Bio/Sanofi trial will evaluate the safety and immunogenicity of two different mRNA formulations. Several dose levels will also be explored as the trial looks to ultimately recruit up to 280 subjects over the coming months and hopefully deliver interim data by the end of 2021.

“We believe that mRNA technology could have several advantages for a seasonal flu application including the potential ability to demonstrate robust immune responses based on preclinical data to date, enable antigen specificity within a short time-frame from seasonal virus strain selection, and deploy agile manufacturing capacity,” says Translate Bio’s CEO Ronald Renaud.