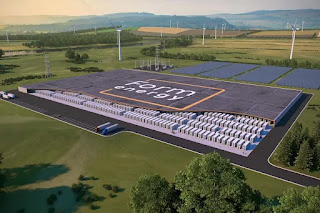 Boston's Form Energy says its iron-air battery systems will provide long-term grid-scale energy storage at a tenth the price of lithium "big battery" installations
Form Energy
Boston's Form Energy is building a commercial-scale pilot of a remarkable new grid-scale battery project that could make a huge contribution to long-term energy storage as the world moves away from fossil fuels. These simple iron-air batteries store up to 100 hours of energy at a tenth the cost of a lithium battery farm.
The big picture here is of course renewable energy. Solar, wind and other forms of green energy produce power as and when it's available, rather than when it's needed. Sometimes they may not produce much at all, for days at a time. So as the world starts to transition away from cheap, responsive and heavily polluting energy sources like coal, one of the great challenges is creating buffer facilities that can cheaply store and release energy as required.

Tesla more or less kicked the grid-level energy storage sector off in 2017 when it built the world's biggest battery in South Australia. The project was a huge success, and spawned many similar, larger developments worldwide. But there are inherent issues with lithium batteries. They're expensive, they wear out, they're better suited to quick turnaround than long-term storage. Not to mention, China's near-stranglehold on the lithium battery industry presents genuine energy security issues for other countries in the race to zero carbon by 2050.

Form Energy believes it has the answer: an iron-air battery capable of mass deployment at very low cost, using extremely common materials, capable of supplying power for up to 100 hours in an emergency situation. At "less than 1/10th the cost of lithium-ion," a system like this could feed stored energy back into the grid at a price "competitive with conventional power plants,"

Iron-air batteries essentially work by initiating and reversing the rust process. Metallic iron combines with oxygen to release energy in the discharge cycle, and then when energy is applied to this rust, it converts back into metallic iron and releases its oxygen. It's a technology that's lain dormant for many decades due to a wasteful hydrolysis issue, which reduced the battery's efficiency by half until it was addressed in 2012. 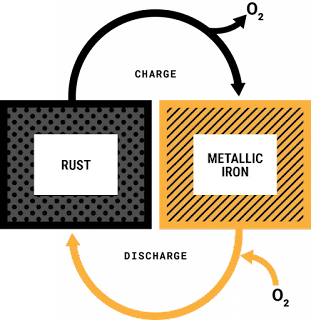 The charge cycle turns rust into metallic iron, storing energy and releasing oxygen. The discharge cycle accepts oxygen and produces energy and rust
Form Energy
Form hasn't put a figure on the efficiency of its units as yet, but its large batteries use a giant iron anode the company says is the biggest anode ever made. The cells, about a meter square, are slotted into battery modules around the size of a washing machine, bathed in a liquid electrolyte, and they can be rolled out en masse in installations delivering between 1-3 megawatts of continuous power per acre.

The company says its solution will work well alongside big lithium batteries; presumably, the lithium might be better for fast discharge events like load spike smoothing, and the iron-air batteries will offer a slower-acting energy solution better suited to the times when renewable energy sources aren't delivering enough grunt to power the grid. 100 hours, or four and a bit days, is a useful period for covering heavy storms, for example, that might take wind and solar mostly offline for long stretches.

Another key advantage of a system like this comes at the end of its service life; the materials are highly recyclable.

Form Energy has now raised more than US$300 million to commercialize the system, with steel giant ArcelorMittal and Gates/Bezos-backed Breakthrough Energy Ventures among a large cohort of investors. The first project was announced last year: a commercial-scale project in Minnesota capable of delivering a constant megawatt of power for 150 hours.