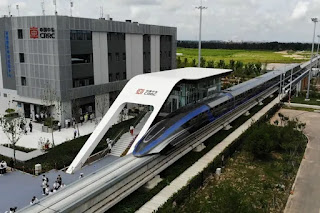 China's CRRC claims its new 600 km/h maglev bullet train will be the fastest ground transport service in the world
CRRC Corporation
China has produced the first of a new breed of maglev trains capable of speeds up to 600 km/h (373 mph), or nearly half the speed of sound. It says these will be the fastest ground transport services available on the planet.
The new maglev system was revealed to the public in Qingdao yesterday by its manufacturer, Chinese state-owned company CRRC Corporation, which said the new trains could make the 1,200-odd kilometer (745-odd mile) trip between Beijing and Shanghai a three and a half hour doddle, including waiting times. That's as compared to a two hour, five minute plane ride or a twelve-hour drive.

It's not yet clear where exactly these machines will be rolled out, but Nikkei Asia points out that CRRC exports trains all over the world, "especially to countries that have signed onto Beijing's Belt and Road infrastructure initiative." The trains can be configured to have between two and 10 cars, with each holding up to 100 passengers depending on fitout.

China claims this'll be the fastest ground vehicle on the planet, although the Central Japan Railway Company has already tested its own high-speed maglev at a world-record 603 km/h (375 mph). So perhaps this one's standard cruise speed will beat the Japanese train, or perhaps its creators believe it's got a heck of a top speed run in it. 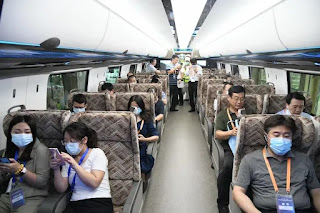 Each car will seat up to 100 passengers, depending on configuration
CRRC Corporation

According to China's Global Times, the "whirlpool" brake system on these things is considerably more efficient than previous efforts; this train will only take 10 km (6.2 mileIf CRRC demonstrates you can get 600 km/h performance out of a regular maglev, hyperloops will need to leap out of the gate going significantly faster to make a case against their higher costs.

Indeed, these new CRRC trains have their own uphill battle to fight proving their commercial viability. The Guardian reports the current small-scale high-speed maglev running between Shanghai's CBD and its international airport some 30 km (19 miles) away cost about US$1.14 billion to build, and has consistently lost around a further US$100 million every year since it opened in 2004.

If regular maglev bullet trains are going to regularly hit these kinds of speeds, companies working on hyperloop-style projects will need to start aiming considerably higher. Because as expensive as maglev rail is to build – and it's very expensive – hyperloops require operators to build ultra high-speed maglev systems inside fully air-sealed tubes, and then use vacuum pumps to keep the air pressure inside low enough to dial down wind drag.