Russia has flown prototypes of its six-seat hybrid VTOL Cyclocar 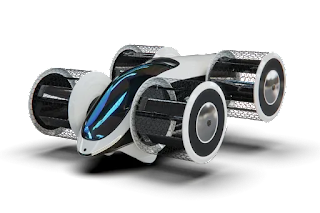 The Cyclocar will carry six people, or up to 600 kg of cargo, up to 500 km (310 miles) thanks to a hybrid powertrain and that unconventional propulsion system
Russian Government
Russia's Foundation for Advanced Research has already flown a 60-kg (132-lb) prototype of its Cyclocar VTOL aircraft, which uses a super-responsive cyclical propeller propulsion system. A full-size, long-range, six-seat Cyclocar is expected to fly in 2022.
We've seen this cyclic propulsion system before, from Austria's Cyclotech, which was previously known as D-Dalus. It places a number of variable-pitch blades in fast-rotating barrels. Each blade changes pitch constantly as the barrel spins, meaning each corner of the aircraft can vector its thrust through 360 degrees nearly instantly, without changing the RPM of the motors.

While this would make cyclic propulsion a terrific solution for a gasoline-powered VTOL, the Russians are planning to use it with a hybrid propulsion system, with full electric drive and a range-extending combustion generator. The six-seat aircraft is expected to fly at up to 250 km/h (155 mph) – this is a fair bit slower than many lift and cruise or vectored thrust multicopter designs, presumably because it has no wings and needs to keep its thrust vectored partially downward at all times.

Range, on the other hand, is huge at up to 500 km (310 miles) thanks to the excellent energy density of gasoline. The final generator engine hasn't been decided on at this stage, but it'll be Russian-built, and either a rotary piston engine or a turboshaft. The propulsion barrels will have a large diameter of 1.5 m (5 ft), and it'll carry up to six people, or 600 kg (1,323 lb) of payload, in either piloted, autonomous or remote-controlled trim. A loading ramp at the rear will improve access for disabled passengers and make cargo loading more practical.

The team has worked out the kinks and complexities in the propulsion system flying sub-scale prototypes shown in the video above, the largest of which weighs 60 kg. The video also demonstrates a rather hair-raising capability of the aircraft to hover in a vertical orientation like a tail-sitter, which we guess might be handy in tight parking spaces?

Project team leader Yan Chibisov said in a Russian-language press release that while the cyclic propulsion system was very aerodynamically complex, it's quiet, compact, and shielded for protection against foreign objects, while enabling very fast thrust vectoring. Initial testing undertaken in conjunction with the Novosibirsk Institute of Thermophysics, said Chibisov, fully confirmed the team's thrust and power consumption calculations, and he's confident that the system will make its way onto an aircraft within three years.

With a full-size, battery-electric prototype expected to begin test flights in 2022, it'll be interesting to see where the Cyclocar goes from here. Commercialization is no joke, and a highly expensive process. The team's video, shown below, appears to suggest that it might start out as a military project first and foremost.