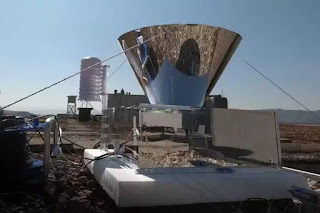 The pilot version of the condenser system, which cools the inside to help water condense and collect
ETH Zurich / Iwan Hächler
Engineers at ETH Zurich have designed a new device that can wring drinking water out of the air. The system works day and night, and doesn’t require any additional energy input, making it suited for use in remote or developing areas.
It’s a frustrating fact of life that water is literally all around us in the air, but it’s largely inaccessible. There are a range of methods of doing so – many use materials or micro-structures with high surface areas that trap water molecules, then release them when heated by sunlight – but many require external power for heating, while those that don’t often rely on temperature fluctuations over a day and night cycle, so can’t run 24 hours a day.

The ETH team’s new device aims to solve both of those problems. In a way it's the opposite of a solar still – it’s essentially a big box designed to cool itself down drastically compared to the outside environment, so that water vapor condenses

This process starts with the most prominent feature of the device – a big cone on the top. This acts as a radiation shield that deflects ambient heat in the air, as well as keeping sunlight off the upper surface of the box.

This surface has a few tricks of its own to help keep its cool. It’s made up of a pane of glass coated with layers of a specially designed polymer and silver, which allows it to firstly reflect sunlight away to prevent it from heating up. The heat that it does capture is instead emitted in a specific infrared wavelength so that it passes right through the atmosphere and “vents” straight into the cold of space. 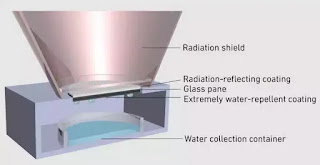 A diagram of the new water condenser design
Haechler I et al. Science Advances 2021
The end result is a box that the team says can be as much as 15 °C (27 °F) cooler than the outside temperature. That creates ideal conditions for condensation, which gathers on a special surface on the ceiling inside the box. This surface is coated in a superhydrophobic material that repels the water, so that it forms into droplets and falls into a collection container underneath.

That’s not the biggest yield ever seen from a water harvester like this – that honor still belongs to a Johns Hopkins design that can wring out an astonishing 8.66 L (2.3 gal) per day per kilogram (2.2 lb) of material. But the yield of the new device is the same as other recent designs, except that they require power where this new one operates entirely passively. That means it could be left out wherever it’s needed to work, producing water 24/7 with little effort required.

“In contrast to other technologies, ours can really function without any additional energy, which is a key advantage,” says Iwan Hächler, an author of the study.

Next the team plans to investigate how well the design may be scaled up. The research was published in the journal Science Advances.