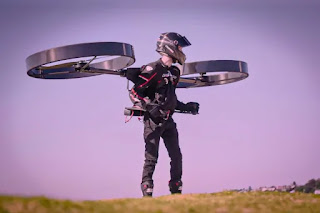 A green alternative to the humble kerosene-burning jetpack?

It uses just two rotors, but fairly large ones with diameters around 3 ft (~90 cm). These connect via what appear to be carbon fiber tubes to a rigid-framed backpack with some underslung battery packs and a pair of flat armrests with hand controls on them.

Where drones with four or more rotors are able to self-stabilize and achieve control authority simply by varying the speeds of their fixed rotors, this two-rotor arrangement does it by twisting its rotors to vector the thrust. 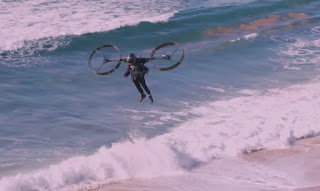 Looking stable and controlled, the pilot takes the Copterpack up to an impressive height
Copterpack

And the arrangement here looks surprisingly friendly to fly. The pilot takes off in a stable and controlled fashion, rises to a frankly scary height over a beach, then demonstrates the Copterpack's forward and sideways movement and yaw control with some mildly aggressive-looking turns before touching down very gently.

Given the small size of the battery pack here, and the well-known energy density issues of lithium batteries, we don't expect it stays in the air very long at this point. This is likely the chief factor behind why it looks so ungainly; large diameter rotors produce lift more efficiently than smaller ones, so the Copterpack needs these big fans until energy storage becomes a solved problem.

As to safety, well, its two-rotor setup doesn't offer anything in the way of redundancy, the pilot is certainly betting his life on the strength of those two carbon tubes, and his motorcycle gear is unlikely to do much in the event of a 50-ft (15-m) drop.

Still, the whole thing looks solidly built, and the flight itself is very impressive. We've reached out to try to connect with the Copterpack team and talk through the design, the flight experience, and what's next, and we'll bring you more when we can.

Check out the video below.