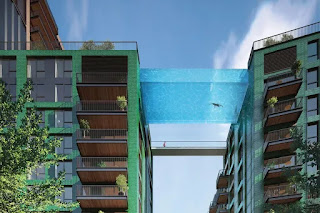 The Sky Pool is suspended at a height of 35 m (114 ft) between two apartment buildings
EcoWorld Ballymore
Vertigo-inducing swimming pools seem to be in fashion at the moment and following news of the Brooklyn Point tower's infinity pool in New York City, London now boasts its own one-of-a-kind swimming pool, too. This one goes much further in its pursuit of thrills though, as it invites visitors to swim between two high-rise buildings in a clear acrylic box.
The Sky Pool was designed by HAL Architects and involved engineers Arup and Eckersley O'Callaghan, plus acrylic fabricator Reynolds Polymer Technologies. The project is part of London's Embassy Gardens, a mixed-use residential development alongside the US Embassy building by Kieran Timberlake.

Structurally, it's made from a single piece of acrylic that has a total thickness of around 35 cm (14 in) and is placed in a steel frame. There's a Sky Deck on either side of the pool, which consists of a double terrace with a bar and restaurant, as well as some seating areas. Additionally, those who don't feel like getting their feet wet can make use of a parallel footbridge to cross the two apartment buildings instead. 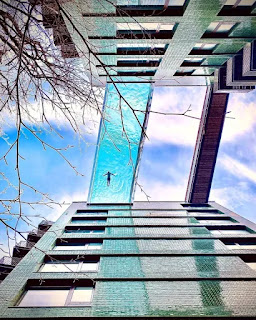 Naturally, it was a significant engineering challenge to ensure the pool could support the weight of the water and the amount of pressure created, while still withstanding wind loads and building sway.

"The side walls form deep beams capable of spanning this distance whilst carrying the weight of the water, as well as resisting the water pressure on the sides and wind loads," explains Eckersley O'Callaghan. "The two buildings are subject to normal movements, which are inherent to buildings of this scale including wind sway and foundation settlement. The pool structure deals with these movements by not being rigidly connected at both ends; it can slide and maintain watertightness."

Simply getting it to London was a painstaking job too: after being fabricated and undergoing rigorous testing in Colorado, the pool structure then made a road trip over to Texas, before taking a three-week ship journey across the Atlantic Ocean to the Netherlands. From there, it eventually traveled to the Port of Tilbury in London and made its way up the River Thames, before being transferred to the site by truck. For this last part of the journey, traffic lights and road signs needed to be removed, and a road completely closed. It was then finally craned into position using a 750-tonne (840-US-ton) mobile crane, supported by a second smaller crane.

There's no word on what's involved in maintaining the structure and, as of writing, we're awaiting confirmation from the developers as to whether or not the Sky Pool is currently in use. According to a recent report by Architectural Digest, it was expected to open on May 19 to Embassy Gardens residents and their guests.