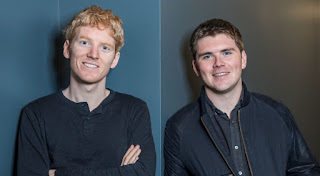 The sky-high valuation makes Stripe Silicon Valley's most valuable private business. The deal means Stripe has almost tripled its valuation in under a year. The company was valued at $36bn last April.

Stripe was founded by the Collison brother, who were born in Tipperary, Ireland. The brothers — John, 30, and Patrick, 32 — sold their first startup when the pair were still teenagers. Both brothers moved to the US to study and founded San Francisco-headquartered Stripe in 2010. The pair were both already paper billionaires but will now see their net worth soar. Forbes said the pair were both worth $3.2bn prior to Stripe's latest funding round.

“We’re investing a ton more in Europe this year, particularly in Ireland,” said John Collison, president and co-founder of Stripe. “Whether in fintech, mobility, retail or SaaS, the growth opportunity for the European digital economy is immense."

Collison said on Twitter that the new funding would create 1,000 new jobs in Dublin over the next five years.

"We are convinced that, despite making great progress over the last 10 years, most of Stripe’s success is yet to come” said Conor O’Kelly, chief executive of Ireland's NTMA. “We’re delighted to back Ireland’s and Europe’s most prominent success story, and, in doing so, to help millions of other ambitious companies become more competitive in the global economy.”

Stripe's original focus was making products that made it simple for small businesses and artisans to accept payments online. More recently, the company has expanded into the broader field of finance, launching products covering fraud, card issuing, subscriptions, and managing cashflow. The company's mission statement is to "increase the GDP of the internet."

“We’re investing in the infrastructure that will power internet commerce in 2030 and beyond,” said Dhivya Suryadevara, Stripe’s chief financial officer.

“The pandemic taught us many things about society, including how much can be achieved—and paid for—online, but the internet still isn’t the engine for global economic progress that it could be.

"We’re laser focused on helping ambitious businesses grow faster. While Stripe already processes hundreds of billions of dollars per year for millions of businesses worldwide, the opportunity ahead is much larger for Stripe than it was when the company was started 10 years ago.”

In recent years Stripe has begun working with bigger and bigger businesses. The company said it now works with more than 50 businesses that process over $1bn each year. Stripe customers include Jaguar Land Rover, Waitrose, Deliveroo.