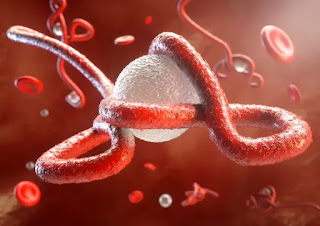 This is much longer than scientists knew was possible.

A person who survived the major Ebola outbreak in West Africa between 2014 and 2016 may have harbored the virus for five years before it hopped to another person and triggered the current outbreak in Guinea, according to a new analysis.

Scientists previously knew that the Ebola virus could hide out in the bodies of survivors, especially in "privileged" areas of the body where the immune systemis less active, such as in the eyeballs or the testes, Live Science previously reported. That means that the person could shed the virus for some time after recovering from the deadly infection; and in rare occasions, that person could transmit it to others. The longest a person has been known to shed the Ebola virus was 500 days, according to STAT News.

But a new analysis suggests that the Ebola virus can not only hide out for much longer than that, but it may also have the ability to spark brand-new outbreaks. To analyze the current Ebola outbreak in Guinea, which has  now infected 18 people and killed nine, Guinea's Ministry of Health sent three samples of the current variant to the World Health Organization's laboratory at the Institut Pasteur de Dakar in Senegal.

There, researchers sequenced the samples to figure out the exact genes that make up its genome, and then they compared that with previous Ebola virus variants. They found that the current variant is very similar to the 2014 "Makona variant" that caused the West Africa outbreak in 2014 to 2016 and killed more than 11,000 people across Guinea, Liberia and Sierra Leone.

In fact, the new variant only had about a dozen genetic differences, which is "far less than what would be expected during sustained human-to-human transmission," the researchers wrote in the analysis published to the discussion forum virological.org on Friday (March 12) and not yet peer-reviewed.

Had the virus been silently being spread from person-to-person since the West Africa outbreak, it would have likely evolved more than 100 different mutations in the past five years, according to the report. Rather, it's likely that this virus lingered in the body of someone who was infected during the previous outbreak five years ago and it hopped to another person, such as through sexual transmission, prompting the current outbreak, according to the analysis.

But in the case of this new outbreak, the story is still muddled. More research is needed to tease out exactly what happened, according to Science Magazine. The first known case of the current outbreak in Guinea was a nurse who was infected and died in January, though it's also possible that the nurse was infected after caring for her sick mother, according to STAT News; a couple of people then became infected after attending the funeral.

Prior to this analysis, scientists assumed that new Ebola outbreaks were mostly caused by the virus jumping from animal species to humans, according to Science. Though it's possible this could have happened in Guinea, it's "incredibly unlikely" given that the new virus samples and those from the previous West African outbreak are so similar genetically, one of the researchers Stephan Günther of the Bernhard Nocht Institute for Tropical Medicine told Science.

The findings also raise the question about whether survivors, rather than infected animals, could have sparked other outbreaks in Africa, according to The New York Times. Many survivors not only struggle with the long-term effects of having been infected with a deadly virus, but they also face stigmatization, according to Science Magazine.

The possibility that Ebola resurged after five years from a survivor, "opens new challenges for survivors, their families and their communities, but also for the health system that has to create ways to work with communities, known and unknown survivors, without creating further stigmatization," the researchers wrote in another post on virological.org.

If indeed survivors with lingering viruses in their bodies can prompt new outbreaks, vaccinating "much of equatorial Africa" against Ebola even when there isn't an outbreak may be the solution, Dr. William Schaffner, an infectious-disease expert at Vanderbilt University, told the Times. There are currently approved vaccines against Ebola, but these are only used when a region is facing an outbreak, according to the Times.