It turns out that there still are new things under the sun
– or in this case, under the water. Scientists have recently discovered not one but two previously-unknown species of the six-gill sawshark, which is itself rarely seen.

Not to be confused with sawfish, sawsharks similarly have a long tooth-edged rostrum (snout) which they swish from side to side in order to cut up prey such as small fish and squid. They differ from sawfish in being shorter (maximum length of about 1.5 m/4.9 ft), sporting a pair of sensory barbels on the rostrum, and having gills located on the bottom of the body.
And whereas most sawsharks have five gill slits, six-gill sawsharks … well, they have six. Previously, there was only one known species of six-gill, called Pliotrema warreni. In a recent investigation of small-scale fisheries off the coasts of Madagascar and Zanzibar, however, an international team of scientists discovered two others.
The new sharks are known as Pliotrema kajae and Pliotrema annae, or more informally as Kaja’s and Anna’s six-gill sawsharks. 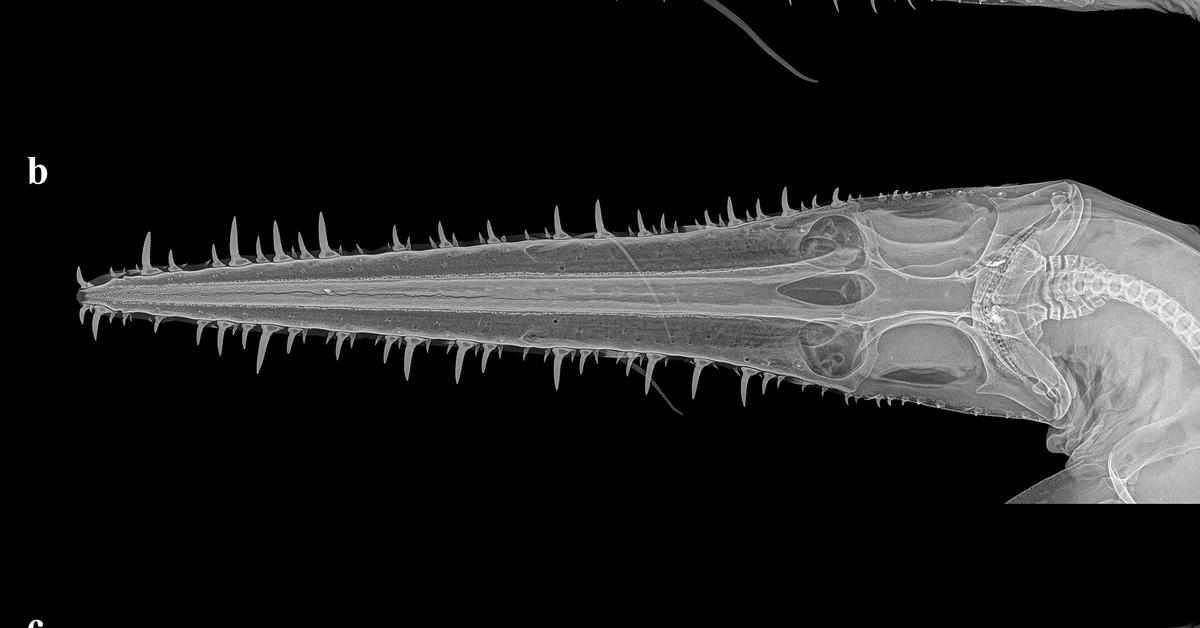 A radiograph of Pliotrema annae
Newcastle University
Dr. Ruth Leeney, from London's Natural History Museum, started by coming across two post-catch P. kajae rostra. Multiple full-body specimens, which weren't previously known to represent a new species, were subsequently discovered in museum collections. Researchers from Britain's Newcastle University and Zanzibar's Institute of Fisheries Research, meanwhile, collected two P. annae specimens.
The main visual difference between P. warreni and the two new six-gills is the location of their barbels – whereas the sensory organs are about two-thirds of the way down from the tip of P. warreni's rostrum, they're in the middle of the new sharks' rostra. Additionally, P. annae has a shorter rostrum than the two other species.
"Considering their known depth distributions, both new species are likely affected by fishing operations," says lead author of the study Dr. Simon Weigmann, from the Elasmobranch Research Laboratory in Hamburg, Germany. "This assumption, combined with the limited range and apparent rarity of both new species, raises concerns that they are vulnerable to overfishing and might be in continuing decline."
A paper on the research was recently published in the journal PLOS ONE.
Source: Newcastle University