Two Russian military officers have been accused of being behind the Salisbury Novichok attacks. The Metropolitan Police and the Crown Prosecution Service say there is sufficient evidence to charge Alexander Petrov and Ruslan Boshirov with offences including conspiracy to murder. Those offences relate to the case of former Russian double agent Sergei Skripal and his daughter Yulia who were poisoned in the Wiltshire town in March.

Three months later Dawn Sturgess and Charlie Rowley were admitted to hospital after being contaminated with a discarded perfume bottle, used to carry the poison. Petrov and Boshirov flew into the UK on an Aeroflot flight for just two days in March and were seen on CCTV close to the Skripals’ house on the days of the attacks.  Prime Minister Theresa May addressed parliament this lunchtime and said that intelligence provided by UK agencies indicated that the two Russians responsible for the Salisbury attack are officers of Russia’s GRU military intelligence service. In a statement that will deepen the diplomatic crisis between the two countries, the Prime Minister said: ‘The GRU is a highly-disciplined organisation with a well-established chain of command. So this was not a rogue operation. ‘It was almost certainly also approved outside the GRU at a senior level of the Russian state.’ The Skripals spent weeks in hospital in a critical condition after being poisoned with the nerve agent, which had been placed on their front door . Police officer Nick Bailey was also admitted to intensive care after becoming contaminated when he visited the Skirpal’s house. 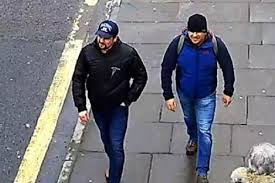 This morning, detectives also formally linked the Skripal poisoning with that of Dawn Sturgess and Charlie Rowley after saying the Novichok was from the same batch. Ms Sturgess died in July after mistaking the poison for perfume that her partner Charlie had found discarded in a charity bin. Mr Rowley was released from hospital but is now back in there again fighting for his life with meningitis after his immune system was severely weakened by the nerve agent. Today the CPS said it would not be applying to Russia for the extradition of Petrov and Boshirov. The UK and Russia do not have any agreement about the exchange of wanted people.

However, a European Arrest Warrant has been obtained and Interpol Red Notices are set to be issued. Advertisement if(window.adverts) { adverts.addToArray({"pos": "mpu_mobile_mid"}) } Advertisement if(window.adverts) { adverts.addToArray({"pos": "mpu_tablet_mid"}) } Assistant Commissioner of the Metropolitan Police Neil Basu said it is likely the suspects were travelling under aliases and Petrov and Boshirov are not their real names. They are believed to be aged around 40. The Met Police said the pair arrived at Gatwick airport at 3pm on Friday 2nd March on Aeroflot flight SU2588.

They then travelled by train into London, arriving at Victoria station at approximately 5.40pm. They then went through Waterloo station and spent the night at the City Stay Hotel in Bow Road, East London. The following morning, they caught the underground to Waterloo and went on a train to Salisbury, arriving at approximately 2.25pm. Police said they believe they conducted a reconnaissance of the Salisbury area before returning back to their London hotel at 8.05pm the same evening.

On Sunday 4th March, they made the same journey back to Wiltshire leaving their hotel around 8am. CCTV shows them in the vicinity of Mr Skripal’s house that afternoon where officers believe they contaminated the front door with Novichok. They left Salisbury and returned to Waterloo Station, arriving at approximately 4.45pm and boarded the London Underground at approximately 6.30pm to London Heathrow Airport. From Heathrow Airport, they returned to Moscow on Aeroflot flight SU2585, departing at 10.30pm on Sunday, 4 March

Culled from Metro.
﻿
Posted by Tony Ogunlowo at Wednesday, September 05, 2018