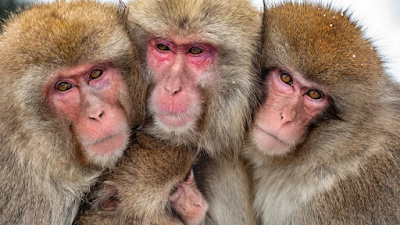 executed by a team of "specially commissioned hunters." The macaque was part of  a "monkey gang" that is responsible for more than 50 attacks in the city of Yamaguchi.

For close to one month, a mob of Japanese macaques (Macaca fuscata), the northernmost species of non-human primates, has terrorized the city, biting and scratching residents. The monkeys haven’t just attacked people in the streets — they have also learned how to open sliding doors and climb into windows, the BBC reported. In one incident, a monkey broke into a kindergarten classroom and leapt on a 4-year-old girl. In another incident, a monkey climbed through a window and supposedly tried to snatch a baby.

"I heard crying coming from the ground floor, so I hurried down," the baby's father told Mainichi Shimbun Daily, as reported by the Guardian. "Then I saw a monkey hunching over my child."

Some residents have begun arming themselves with  umbrellas and pruning shears to protect themselves from the macaques, The Guardian reported. The school where the kindergartener was attacked is keeping kids away from the playground, where macaques are still at large.

The recently euthanized monkey was a 4-year-old male implicated in at least one of the attacks in the city — although it’s unclear whether he’s the main culprit or not. Either way, it’s unlikely that the gang will leave Yamaguchi’s residents alone. Conflict between macaques and humans has been escalating in the region for decades, especially in rural areas where the monkeys feast on farmers’ crops, according to a study published April 2021 in the journal Mammal Study.

Japanese macaque populations are steadily increasing, according to the paper in Mammal Study, and the species is classified as one of least concern by the International Union for the Conservation of Nature's (IUCN) Red List. However, these monkeys were once in danger of extinction. At the end of the 19th century, roughly half of Japan’s forests, where macaques reside, were lost to deforestation. In addition to habitat loss, widespread hunting dealt a blow to these primate populations, so that by World War II, macaques were threatened across Japan and were locally extinct in many areas of their former range.

After World War II, Japan banned macaque hunting. But this movement to conserve these monkeys proved to be a little too successful. The macaques’ two natural predators, the mountain hawk-eagle (Nisaetus nipalensis) and the Japanese wolf (Canis lupus hodophilax), are endangered and extinct, respectively. Without these predators to keep their numbers in check, macaque populations have exploded, increasing interactions with people and contributing to the kind of conflict seen in Yamaguchi.

Japan’s changing demographics could also be contributing to increasing conflict between macaques and humans, the authors of the 2021 study reported . Over the past 50 years, people have moved away from rural areas and towards cities. It’s possible that with fewer people living in these small villages, some of which have been abandoned, animals — including roving gangs of bold macaques — are moving in and taking over, according to the study. That change has a ripple effect on urban centers like Yamaguchi, NBC News reported. These farming regions used to act as a buffer between wildlife and cities. The disappearance of rural villages is bringing city-dwellers contact with wildlife more often.

But the loss of one member hasn’t stopped the rest of the monkey gang, Insider reported. Almost a week later, the macaques continue to wreak havoc on Yamaguchi.