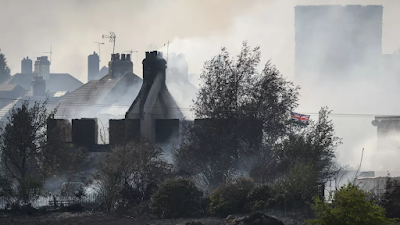 As England bakes under record-breaking heat, a surge in wildfires has led the London Fire

Brigade to declare the blazes a "major incident" in the nation's capital, where temperatures recently exceeded 104 degrees Fahrenheit (40 degrees Celsius) for the very first time.

Burnt ash and smoke filled London's air as 350 firefighters battled numerous fires across the city; some residents were forced to flee as their homes were consumed by the flames. London Mayor Sadiq Khan warned(opens in new tab) that the "huge surge" in the number of blazes was putting the fire service under "immense pressure."

Since last week, hundreds of wildfires have been reported across mainland Europe and England, as the continent reels under a blistering heat wave. Temperatures across the normally temperate United Kingdom have risen above those typically recorded in equatorial locations such as Jamaica, the Maldives and Barbados, according to the U.K. Meteorological Office. At Heathrow Airport on Tuesday (July 19) at 12:50 p.m. local time, the U.K.'s meteorological office recorded(opens in new tab) a provisional highest temperature of 104.3 F (40.2 C). This temperature, when it is verified, is set to smash a previous high record of 101.66 F (38.7 C), set in 2019.

"It's virtually impossible for the U.K. to experience 40 C in an undisrupted climate. But climate change, driven by greenhouse gases, has made these extreme temperatures possible — and we're actually seeing that possibility now," Stephen Belcher, the chief scientist of the U.K. Meteorological Office, said in a video statement(opens in new tab).

Sweltering weather in recent days has disrupted travel and affected schools and hospitals across the country. Many U.K. homes and public buildings were designed to trap and insulate heat, and do not have air conditioning. The extreme heat has forced London's Luton Airport to suspend operations, and has warped a main road in eastern England so much that it now resembles a "skatepark," according to a local police statement(opens in new tab). Data from the two Sentinel-3 Earth observation satellites(opens in new tab) has also revealed that ground temperatures in the U.K. soared above 122 F (50 C) on Monday morning (July 18) — the first day of the heatwave's forecasted two-day peak.

Extreme heat is also scorching much of Europe, where the European Union's satellite program Copernicus observed(opens in new tab) that more than 154 square miles (400 square kilometers) of land in France, Spain and Portugal was set ablaze in the last 10 days.

Weather patterns are likely to become even more extreme and unpredictable as Earth warms due to climate change. According to a study published June 28 in the journal Environmental Science: Climate(opens in new tab), heatwaves that would have had a 1 in 10 chance of happening during any given year in the pre-industrial age would now occur nearly three times more often on average, and would be 2.2 degrees F (1.2 degrees C) hotter; and heat waves that had a 1 in 50 chance of happening during pre-industrial times are likely to occur five times more often.

"The direction is clear and in the future these kinds of heat waves are going to be normal and we will see even stronger extremes," World Meteorological Organization Secretary-General Petteri Taalas said at a news briefing in Geneva, United Nations News reported(opens in new tab).

In April, a landmark United Nations report warned that, if Earth is to stay below the dangerous global threshold of 1.5 C warming, countries will need to reduce carbon dioxide emissions by 2025 and halve current emissions by 2030, a strategy that will require "rapid, deep and immediate" cuts to the quantities of greenhouse gases produced around the world. The report, which assessed multiple mitigation strategies for combating climate change, stated that even if all the carbon-cutting policies that were previously promised by governments had been fully implemented by 2020, the world would still warm by a disastrous 5.8 degrees F (3.2 degrees C), Live Science previously reported.