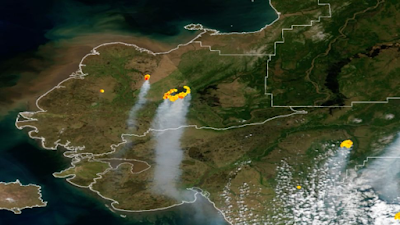 As of Thursday (June 30), 157 active fires were burning across Alaska. In just one month,

wildfires in the state have burned more than 1.6 million acres — a threshold that Alaska has not reached this early in the fire season in decades.

The blazes include the East Fork Fire in the western part of the state near the Yukon Delta is one of the largest tundra fires on record and has burned more than 250,000 acres since May 31. Meanwhile, the Lime Complex Fire in the southwestern region of the state is even larger, spreading across more than 600,000 acres.

The smoke and debris from the fires have compromised air quality, leading the Alaska Department of Environmental Conservation to issue warnings for numerous regions in the state, according to the statement.

NOAA satellites offer crucial insight on the wildfires and how they spread. In particular, scientists use data from the Visible Infrared Imaging Radiometer Suite (VIIRS) instrument on the Joint Polar Satellite System's NOAA-20 and Suomi NPP satellites to detect and track wildfires, especially in remote regions.

The NOAA's GOES-16 and GOES-17 satellites also help early detection in remote areas, identifying wildfires from orbit before people spot them on the ground. These satellites are equipped with infrared image technology, which allows them to detect hot spots in real-time and pinpoint the intensity of a fire. The infrared data also allows scientists to track the subsequent smoke-infused thunderstorms, or pyrocumulonimbus clouds, that can lead to severe weather.

"The benefits provided by the latest generation of NOAA satellites aren't just seen during a fire but are important in monitoring the entire life cycle of a fire disaster," NOAA officials wrote. "Data from the satellites are helping forecasters monitor drought conditions, locate hot spots, detect changes in a fire's behavior, predict a fire's motion, monitor smoke and air quality, and monitor the post-fire landscape like never before."

The NOAA's weather prediction system, called the High-Resolution Rapid Refresh (HRRR)-Smoke model, provides a 48-hour forecast of both surface and high-altitude smoke. This model, paired with data from NOAA's satellites, provide detailed measurements of the amount of smoke produced, the plume height and the direction the smoke is expected to move, which fire crews, first responders and air traffic controllers can use to track and react to the wildfires.