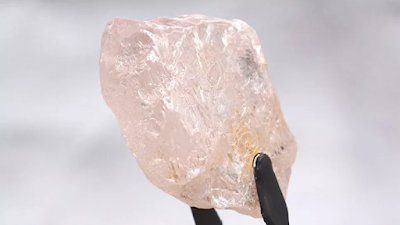 gem of its kind found in the past 300 years.

The pink diamond is estimated to weigh 170 carats, making it just a smidge smaller than the 182-carat Daria-i-Noor diamond — the largest pink diamond in the world, which today is part of the Iranian National Jewels.

The new diamond has been nicknamed the "Lulo Rose," after the Lulo mine in northeastern Angola where it was found, according to a statement from the Lucapa Diamond Company, which owns Lulo and one other diamond mine in Angola. Since 2015, the Lulo mining project has uncovered 27 diamonds weighing more than 100 carats, including the largest diamond ever found in Angola: the 404-carat "4th February Stone," which sold for $16 million in 2016.

The Lulo Rose, the fifth-largest diamond found at Lulo,is expected to sell for an even higher price.

Pink diamonds are relatively rare, and scientists still aren't certain about the phenomenon that gives these stones their rosy hue. In 1999, miners in South Africa uncovered a rough 132-carat pink diamond that was later named The Pink Star. For nearly two years, experts slowly cut and ground the rock into a 59-carat jewel, and in 2013, The Pink Star sold for roughly $83 million at auction, becoming the single most expensive gemstone ever sold.

The Lulo Rose also will have to be cut down from its rough form, which could result in its weight dropping by up to half, according to the statement. But even if the Lulu Rose is reduced to 85 carats, the vivid pink stone looks primed to set a new sales record of its own.

Humans have been collecting and trading diamonds since 2500 B.C., Live Science previously reported. For millennia, their dazzling appearance and extreme rarity made them a sought-after status symbol that only the world's wealthiest could afford.

Diamonds form deep underground — typically 100 miles (160 kilometers) or more beneath Earth's surface — when carbon deposits are exposed to the extreme heat and temperatures of the inner Earth. Some diamonds may burst to the surface during volcanic eruptions, but today most are found through mining efforts around the world.

Approximately 90 million carats of rough diamonds are mined for jewelry every year, generating more than $300 billion in revenue worldwide; however, conditions for mining diamonds are often hazardous, and the industry has been associated with the displacement of Indigenous peoples, worker exploitation, pollution and human rights abuses, according to a report released in 2018 by the nonprofit Human Rights Watch.