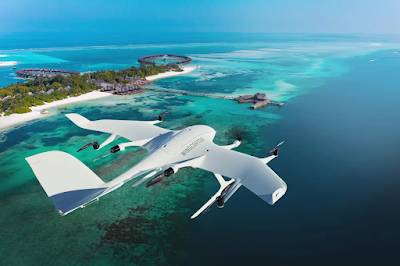 German company Wingcopter has signed a deal to roll out 12,000 of its long-range, triple-drop delivery drones across Africa over the next five years, in what promises to be the largest commercial drone deployment ever attempted.
The Wingcopter 198 is a handsome machine, with a wingspan of 198 cm (78 inches) and the ability to carry up to 6 kilograms (13.2 lb) of cargo. It's a clever design featuring eight propellers mounted on arms extending forward and back from the wings. The outer four props are lift-only, for VTOL purposes, and lock themselves into an aerodynamic configuration during cruise. The inner front two props are capable of tilting 90 degrees forward to provide horizontal thrust, and the inner rear two props also tilt – but primarily simply to fold their props back and get out of the way of the airflow from the front two.

It'll cruise at up to 144 km/h (89 mph) for distances up to 110 km (68 miles), in a broad range of weather conditions. If you've got multiple deliveries to make, it can carry up to three packages per flight, hovering and lowering them to the ground at the drop points. They're designed for fully autonomous operation, or alternatively an operator can use Wingcopter's control station software to monitor or pilot up to 10 drones at once. 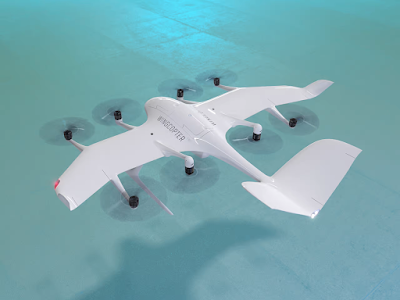 The Wingcopter 198 uses an 8-prop VTOL/fast cruise system with two pairs of innovative tilting props
Wingcopter
Wingcopter has recently raised some US$42 million in its latest funding round, bringing its total raise up over US$60 million, and its new deal with Continental Drones in Africa will result in an enormous fleet of Wingcopter drones operating in all 49 sub-Saharan countries all across the continent.

These operations make huge sense in Africa, where insufficient infrastructure is a barrier not only to economic development, but to issues like health care. This fleet of drones will transport goods, medicines, lab samples and vaccines to remote locations quickly and with zero emissions.

“Together with Wingcopter, we are committed to accelerate the development and economic integration of Africa by enabling the creation of drone-based delivery networks across the continent," says Alexander Asiedu, Founder of Continental Drones, in a press release. "With our longstanding business experience on the ground and Wingcopter's best-in-class drone technology, these networks offer a real chance to fuel economic development and help improve the livelihood of millions. African nations show true leadership by implementing this cutting-edge technology for the better of their people and generations to come."

Check out the 198 in the video below.