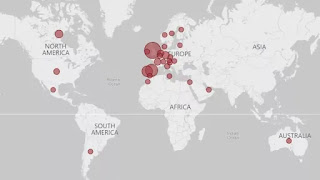 The U.S. Centers for Disease Control and Prevention (CDC) ramped up its alert

level for the ongoing monkeypox outbreak as the nation's case count hit 30 and the global case count rose above 1,000.

The CDC now advises that travelers "practice enhanced precautions" to avoid contracting and spreading the rare viral disease, the agency's website states(opens in new tab). The CDC says that people should avoid close contact with sick people, including those with rashes on their skin or genitals, and with dead or live wild animals, especially rodents, such as rats and squirrels, and non-human primates, meaning monkeys and apes.

"If you are sick and could have monkeypox, delay travel by public transportation until you have been cleared by a health care professional or public health officials," the CDC said.

The overall risk of catching monkeypox is still low for the general public, but the CDC advised that individuals seek medical attention immediately if they develop new, unexplained skin rashes anywhere on the body. These rashes typically progress through several stages, initially looking like discolored patches of skin then raised bumps, then blisters and finally large, pus-filled pimples. These skin lesions eventually scab over and fall off. Other symptoms of monkeypox include fever, chills, headache, muscle aches and swollen lymph nodes, according to the CDC.

Avoid contact with others if you suspect you may have monkeypox, the CDC said. If possible, call ahead before going to a health care facility, or inform the staff upon arrival that you think you may have monkeypox. Tell your doctor if you've had recent contact with someone with a confirmed or potential monkeypox infection or if you've recently traveled to a country where the virus regularly circulates or has been recently detected.

As of Monday (June 6), a total of 1,019 confirmed and suspected cases of monkeypox have been reported in 29 countries where the virus does not typically spread, according to the CDC(opens in new tab). The U.K. has reported the most cases so far, at 302, followed by Spain, Portugal, Canada and Germany.

Similar to the cases reported in Europe, a high proportion of the cases in the U.S. have affected men who have sex with men, according to a Morbidity and Mortality Weekly Report(opens in new tab) (MMWR) released on June 3. Monkeypox is not considered a sexually transmitted disease and is not more likely to affect any one population of people over another. However, the virus does spread through contact with contaminated bodily fluids and sores on infected people, and at least some of the cases among men who have sex with men are suspected to be linked to raves that recently took place in Europe, Live Science previously reported.

"CDC urges health care providers in the United States to be alert for patients who have rash illnesses consistent with monkeypox, regardless of a patient's gender or sexual orientation or a history of international travel or specific risk factors for monkeypox," the MMWR report said.

Many people who catch monkeypox develop mild illness that resolves in about two to three weeks, but some groups are at risk of severe illness, according to the CDC(opens in new tab). These groups include individuals with weakened immune systems; children ages 8 and younger; pregnant and breastfeeding people; and people with existing infections or other conditions that may increase their risk of severe infection.

There are no treatments specifically approved for monkeypox, but several antivirals and an antibody treatment are sometimes used, off-label, to treat the infection. People who have recently been exposed to the virus may also be given one of two vaccines — ACAM200 or JYNNEOS — to reduce the severity of their symptoms or prevent the infection altogether, the CDC said(opens in new tab). "CDC recommends that the vaccine be given within 4 days from the date of exposure in order to prevent onset of the disease," the agency's website stated. "If given between 4–14 days after the date of exposure, vaccination may reduce the symptoms of disease, but may not prevent the disease."

ACAM200 is approved as a vaccine for smallpox but can be used for monkeypox under an "expanded access investigational new drug protocol," CDC officials said in a press briefing on Friday (June 3).  JYNNEOS is approved for both monkeypox and smallpox.

"We have more than enough vaccine available for the current outbreak," Dawn O'Connell, the Assistant Secretary for Preparedness and Response within the U.S. Department of Health and Human Services, said Friday.