Lexus rolls out first battery-electric for global markets: the RZ 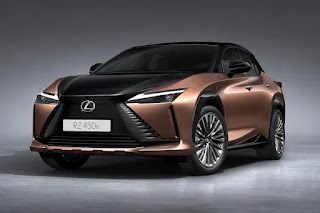 Lexus has unveiled a new all-electric vehicle model, the RZ. The luxury brand will offer the RZ to the global market, and its underpinnings will likely be the basis of more EV models to come. It's the first of Lexus’ planned electric vehicles, with a goal of all Lexus offerings being EV's by 2035.

The Lexus RZ is designed on a new platform, the e-TNGA, made specifically for EV models. This platform was first showcased in December of 2021 when Toyota unveiled several concept models based on it, including hints at this new Lexus. The platform includes a steer-by-wire system, an electrified all-wheel drive system, and an emphasis on high aerodynamic performance. The RZ also includes a full suite of advanced safety features via the Lexus Safety System +.

The Lexus RZ’s unique AWD setup uses sensors to control front-to-rear drive force, allowing each motor to run between 0 and 100 percent according to need and real-time dynamics. Called the Direct4 system, this drive force distribution control system is geared towards handling stability, traction control, and driving dynamics. When the steering wheel is turned, for example, it pushes drive force to the front axle for better handling. That force is shifted to the rear axle when the wheel is straightened, to optimize acceleration and body roll coming out of the corner.

The motors are mounted to the axles with a newly-developed eAxle which integrates the motor, transaxle, and power inverter into one unit. The front eAxle is taller and designed to be more forward, while the rear eAxle is wider and more squat to allow maximum passenger and cargo space above. These eAxles are paired with a new regenerative braking system – it utilizes hydraulic control to improve energy recovery efficiency, by allowing the non-friction system to give more braking power before the physical brakes are engaged. 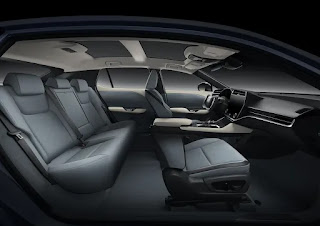 Lexus also designed a new steer-by-wire system for the RZ. This system allows for the use of a yoke-like steering wheel, where hand-over-hand is no longer necessary in sharp turns. The steering is set to maximum at 150 degrees, giving the full range of movement in less than 90 degrees in either direction. Even with a standard round wheel installed, the design for the Lexus allows for a smaller, more compact steering wheel. This frees up legroom and improves forward visibility for the driver.

The batteries for the RZ are under the floor, and help give rigidity to the center portion of the unibody. The front motor placement allows more room for reinforcement of the radiator support portion, and for the use of a V-shaped brace for improved handling. The rear motor placement allows for an improved rear fender brace for stability. MacPherson struts hold the front axle, and a trailing arm double wishbone suspension holds up the rear. In addition, some models of the Lexus RZ will have frequency-sensitive reactive dampers – a first for Lexus.

For aerodynamics, the RZ is shaped to move air not only over the hood, roof and off the tail, but also around side mirrors, across the bodywork, and to the vortex zone behind the car. The lack of need for a large grille allows for a lower hood design, for a slippery profile. Lexus, however, has not disclosed coefficients of drag for the RZ. 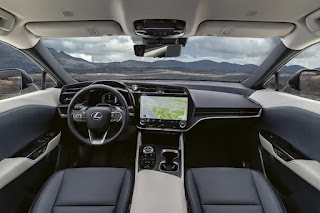 Charge times for the battery will vary by region and plug-in supply. Fast charging capability will be available in most markets, however, and could recharge the RZ in as little as four hours thanks to an integrated warming and control system.

Lexus has not yet priced the new RZ, promising that information closer to launch. The first model, the 2023 Lexus RZ 450e, will enter showrooms in late 2022.