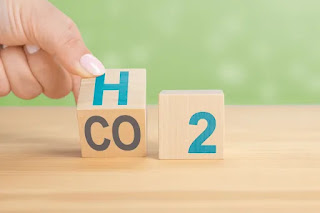 Hydrogen will be one of humanity's key weapons in the war against carbon dioxide emissions, but it must be treated with care. New reports show how fugitive hydrogen emissions can indirectly produce warming effects 11 times worse than those of CO2.

Hydrogen can be used as a clean energy carrier, and running it through a fuel cell to produce electricity produces nothing but water as a by-product. It carries far more energy for a given weight than lithium batteries, and it's faster to refill a tank than to charge a battery, so hydrogen is viewed as a very promising green option in several hard-to-decarbonize applications where batteries won't cut the mustard – for example, aviation, shipping and long-haul trucking.

But when it's released directly into the atmosphere, hydrogen itself can interact with other gases and vapors in the air to produce powerful warming effects. Indeed, a new UK Government study has put these interactions under the microscope and determined that hydrogen's Global Warming Potential (GWP) is about twice as bad as previously understood; over a 100-year time period, a tonne of hydrogen in the atmosphere will warm the Earth some 11 times more than a tonne of CO2, with an uncertainty of ± 5.

One way is by extending the lifetime of atmospheric methane. Hydrogen reacts with the same tropospheric oxidants that "clean up" methane emissions. Methane is an incredibly potent greenhouse gas, causing some 80 times more warming than an equivalent weight of CO2 over the first 20 years. But hydroxyl radicals in the atmosphere clean it up relatively quickly, while CO2 remains in the air for thousands of years, so CO2 is worse in the long run.

When hydrogen is present, however, those hydroxyl radicals react with the hydrogen instead. There are fewer cleanup agents to go around, so there's a direct rise in methane concentrations, and the methane stays in the atmosphere longer.

How does hydrogen escape into the atmosphere?

A lot of it is leakage, according to a second report from Frazer-Nash Consultancy. Store hydrogen in a compressed gas cylinder, and you can assume you'll lose between 0.12 percent and 0.24 percent of it every day. It'll leak out of pipes and valves if you distribute it that way, losing some 20 percent more volume than the methane gas that's now running through municipal pipelines – although since hydrogen is so much lighter than methane, this larger volume equates to just 15 percent of the weight.

Where hydrogen is transported as a cryogenic liquid, boil-off is unavoidable, and you can expect to lose an average of about 1 percent of it per day. Currently, this is vented to the atmosphere.

Indeed, venting and purging operations are currently common across the hydrogen life cycle. They occur during electrolysis, during compression, during refueling, and during the process of conversion back into electricity through a fuel cell.

Where there is venting or purging, the percentages tend to dwarf what's lost through simple leakage – for example, current electrolysis procedures using venting and purging are assumed to lose between 3.3-9.2 percent of all hydrogen produced, depending largely on how often the process starts up and shuts down – this is a bit of a worry in situations where hydrogen production is seen as a way to store excess renewable energy that's not being snapped up by immediate demand.

Purging and venting emissions can be cleaned up significantly by adding systems to recombine the vented or purged hydrogen back into water and feed it back into the process – but it'll be a while before these kinds of operations are economically viable.

In all, the Frazer-Nash report expects that between 1-1.5 percent of all hydrogen in its central modeling scenario will be emitted into the atmosphere, with transport emissions responsible for around half of that, and emissions at the production and consumption ends taking up roughly a quarter each.

Meanwhile, operating under different assumptions, the first report linked expects somewhere between 1 percent and 10 percent of all hydrogen in its global scenario will be emitted into the atmosphere,

No. The UK Government report explains that "the increase in equivalent CO2 emissions based on 1 percent and 10 percent H2 leakage rate offsets approximately 0.4 and 4 percent of the total equivalent CO2 emission reductions, respectively," so even assuming the worst leakage scenario, it's still an enormous improvement.

"Whilst the benefits from equivalent CO2 emission reductions significantly outweigh the disbenefits arising from H2 leakage," it continues, "they clearly demonstrate the importance of controlling H2 leakage within a hydrogen economy."