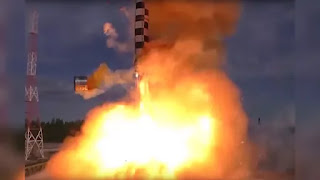 that is capable of launching nuclear warheads anywhere across the globe, but the Pentagon has said it is not a threat to the United States or its allies.

In a televised address following the missile's reported launch on Wednesday (April 20), Russian President Vladmir Putin boasted that the missile, officially called the RS-28 Sarmat and nicknamed "Satan II" by NATO, had no equivalents anywhere in the world and would make adversaries "think twice" before making threats against Russia.

But just how much does the diabolically nicknamed missile add to Russia’s nuclear threat? First introduced by Putin in a 2018 state-of-the-nation address as the "next generation" of nuclear missile technology, the Sarmat missile is 116 feet (35.3 meters) long, and weighs 220 tons (200 metric tons).

Russia began developing the missile in the early 2000s, and it can carry up to 15 light nuclear warheads in an array known as a MIRV (Multiple Independently Targetable Re-Entry Vehicles). MIRVs are a missile type first made in the early 1960s and are designed to allow an intercontinental ballistic missile (ICBM) to send multiple warheads to different targets, according to the Center for Arms Control and Non-Proliferation.

In Wednesday's test, Russia said that the Sarmat was launched from the Plesetsk Cosmodrome, and that its "practice warheads" hit designated targets at the Kura Missile Test Range on the Kamchatka Peninsula, Defense News reported. After the test, Putin said that the missile "is capable of overcoming all modern means of anti-missile defense." He also emphasized that Sarmat's parts are made exclusively domestically, which he says will make its mass production "easier and accelerate the process of providing it for [Russia's] Strategic Missile Force."

But despite Putin’s ominous words, Pentagon Press Secretary John Kirby said in a statement on Wednesday that the test launch "was not deemed to be a threat to the United States or its allies," by U.S. intelligence.

"Russia properly notified the United States under its New START treaty obligations that it planned to test this ICBM," Kirby added. "Such testing is routine and was not a surprise."

Comparing silo-based rockets alone, the new Russian rocket looks formidable. It can launch a maximum payload with a yield of roughly 50 megatons of TNT compared with the U.S. Minuteman III, which fires a maximum payload of 1.425 megatons, according to the CSIS. Of equal concern is Russia's claimed hypersonic capacity, which means it is able to accelerate some missiles faster than Mach 5 (3,836 miles per hour) on their way to their targets. Right now, both Russia and China claim to have missiles with hypersonic capacities in service.

Since 2010, the US has conducted 17 different hypersonic-missile tests, 10 of which failed. The last, a test of a Lockheed Martin developed Hypersonic Air-breathing Weapon Concept (HAWC), flew sometime in mid-March 2022 and was a success.

To conduct the test, Lockheed Martin and the Defense Advanced Research Projects Agency (DARPA) jettisoned the prototype missile from a carrier plane, before boosting it with a scramjet engine so that it "quickly accelerated to and maintained cruise [speed] faster than Mach 5 (five times the speed of sound) for an extended period of time. The vehicle reached altitudes greater than 65,000 feet [19,812 meters] and flew for more than 300 nautical miles [555.6 km]," DARPA officials said in a statement. The missile has so far yet to enter service.

But bigger maximum yields and faster missiles don't mean that Russia can be sure of a first strike advantage. The other active U.S. ICBMs — the UGM-133 Trident II D5 — are equipped to submarines as MIRVs that can shoot up to eight warheads between 1,240 and 7,460 miles (2,000 to 12,000 km) in distance, and can do so from anywhere in the world.

"Russia and the Western nuclear states have had the ability to annihilate each other ever since they acquired strategic nuclear bombers, followed by intercontinental ballistic missiles, over 60 years ago,” Julian Lewis, the chairman of the U.K. Parliament's intelligence and security committee, told the UK Telegraph. "Putin adding this new missile to his pre-existing 'overkill' capability makes absolutely no difference to the effectiveness of our Trident nuclear deterrent submarines."

The U.S. is planning to upgrade one of its ICBMs. The five-decade-old Minuteman III will be replaced by the $100 billion LGM-35A Sentinel beginning in 2029, according to Defense News.